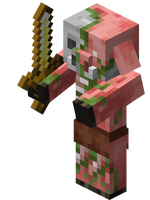 Zombified piglins can spawn in nether wastes, crimson forests, nether portals, and from pigs struck by lightning or from piglins or piglin brutes in the Overworld or in the End. They have a 5% chance of spawning as baby zombified piglins. Zombified piglins do not spawn on top of nether wart blocks. Like other naturally fireproof mobs, they can spawn on magma blocks.

All zombified piglins spawn with a golden sword, which has up to 25% chance of being enchanted in Normal or Hard modes. This chance varies depending on the regional difficulty. The sword's enchantment is from 5 to 23 levels.

In Java Edition zombified piglins spawn in groups of 4 in the Nether at light level 11 and below on most blocks other than nether wart block; In Bedrock Edition they spawn in groups of 2-4 at all light levels. They spawn most commonly in nether wastes, frequently in nether fortresses, uncommonly in crimson forests and are sometimes found riding striders in lava oceans.

In Java Edition, they appear inside one of the portal blocks on the bottom.

In Bedrock Edition, they spawn one block to the east or south of the portal (depending on which direction the portal is facing). Neither slabs nor lighting prevents this. "Portal ticking" can be used to increase the rate of zombified piglin spawning by repeatedly lighting and breaking a nether portal.

Zombified piglin spawning via this process is completely independent of the mob cap, similar to the spawning of phantoms in Java Edition, which means they can still spawn if there are a sufficient number of hostile mobs in the world.

Zombified piglins who spawn in this way cannot travel to the Nether for a preset amount of time, whether they walk through the portal they spawned in or through nearby portals.‌[Java Edition only]

The newly zombified piglin gets the nausea effect.

A zombified piglin keeps any armor or weapons collected before being zombified‌[JE only].

Baby zombified piglins also have a 5% chance of becoming a chicken jockey‌[Java Edition only].

If a piglin is in the middle of bartering and gets zombified while inspecting a gold ingot, it drops the ingot when it turns into a zombified piglin.

Zombified piglins move at 2.28 m/s and are immune to fire and lava. When provoked, their speed increases to 3.38 m/s or faster for babies.

In Java Edition, like zombies, zombified piglins bang on wooden doors and may break them on Hard difficulty.[1]

In Normal and Hard difficulties, up to 55%‌[JE only] or 25%‌[BE only] of zombified piglins pick up any armor pieces and swords better than their golden one, which they always drop when killed. This also prevents them from despawning.

Zombified piglins may pick up an illager banner next to it‌[BE only] as pillagers do.[2]

Zombified piglins are not distracted by gold, and cannot barter, unlike piglins. They also do not follow players that are holding a gold ingot or another gold item.

Zombified piglins are not initially hostile, but all zombified piglins within a 67×22×67 to 111×22×111 area‌[JE only] or a 20-block radius‌[BE only] centered on the attacked zombified piglin become aggressive and converge on the attacker (another mob or player, except goats) if any individual is attacked, unless the zombified piglin attacked is killed in one hit.[3]‌[JE only] In addition, some zombified piglins have the ability to spawn reinforcements when attacked (similar to zombies and which can rarely include actual zombies).‌[JE only] This applies to any hit registered as coming from the player or other mobs, whether its accidentally or purposefully, which includes deflected ghast fireballs, sweep attacks, snowballs and eggs, TNT, or a skeleton arrow. This does not include fireworks shot from crossbows, or dispenser-shot arrows.

A hostile zombified piglin can also "sound an alarm", spreading the aggro to all zombified piglins within a 67×22×67 to 111×22×111 area ‌[JE only] or 20-block‌[BE only] radius. A hostile zombified piglin does this whenever the targeted player is within their follow range (33 to 55 blocks) and has a constant line-of-sight with its target, then it does the same every 4-6 seconds (80-120 game ticks), recruiting any formerly-neutral peers. They pursue players even if they have the Invisibility effect.

In Bedrock Edition, a nearby neutral zombified piglin prevents a player from sleeping, as if it were a hostile mob.

Hostile zombified piglins have slightly different path finding than when they are neutral. For example, they would fall off edges that would cause them fall damage in attempt to reach the attacker where most other mobs would otherwise not do.

When a zombified piglin is angered, the normal piglins do not get aggressive, and vice versa.

Unlike other zombie variants, zombified piglins do not attack villagers and wandering traders.

Zombified piglins have entity data associated with them that contains various properties.

Issues relating to "Zombified Piglin" are maintained on the bug tracker. Report issues there.