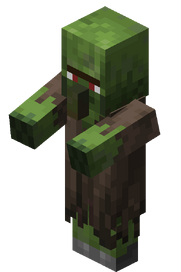 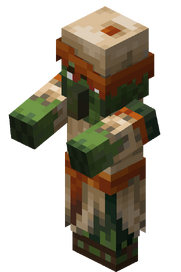 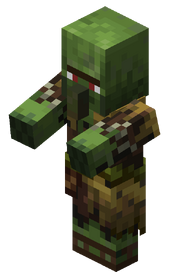 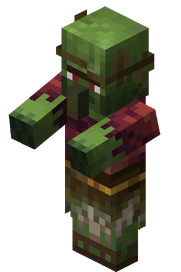 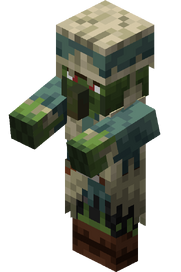 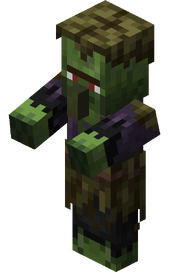 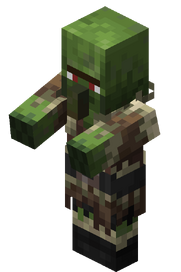 A zombie villager is a variant of the zombie that can be cured into a normal villager using a golden apple while it is under the effect of Weakness.

If any type of zombie kills a villager, there is a chance for the villager to transform into a zombie villager.

In Java Edition a zombified zombie villager does not despawn if the player has traded with it at least once prior to its death, but unlike all other persistent mobs it still counts toward the hostile mob cap. If the zombie villager picks up any item however, it remains persistent but is excluded from the mob cap. In Bedrock Edition all zombified villagers are persistent.

Along with skeletons and regular zombies, some zombie villagers are capable of picking up dropped items. These zombie villagers automatically pick up and hold any item that they come across (except jack o'lanterns‌[Java Edition only], mob heads and pumpkins, as these are worn on their heads), and use any armor, weapons, or tools picked up. If they encounter another similar item, they pick it up and drop their previous item:

Armor worn by zombie villagers is not damaged from most damage sources, which means it cannot "wear out" the way player armor does. Helmets (not blocks like pumpkins) on zombie villagers can wear away and break if the zombie villager is exposed to daylight, or has an anvil or other falling block dropped on its head. Zombie villagers also have a natural armor rating of 2 (

Some zombie villagers that are capable of picking up items spawn already in possession of such items, and those items may also be enchanted. The chances of that event are listed below. If a zombie villager spawns wearing multiple pieces of armor, the armor is never mismatched (i.e. all pieces are made of the same material).

Below is a table listing the various professions, along with the specific job site block that each profession requires:

When they die, zombie villagers drop 0–2 Rotten Flesh. The maximum drop is increased by 1 per level of Looting, for a maximum of 0-5 with Looting III.

They can also drop an iron ingot, carrot, or potato when killed by a player or tamed wolf. This drop has a 2.5% chance of occurring, increasing by 1% per level of looting. Individual items have the following chances of dropping:

Any picked-up equipment has a 100% chance of dropping on death or when cured and drops with the same damage level it had when picked up.

Zombie villagers behave as ordinary zombies, except that they do not convert to drowned when submerged.

Zombie villagers can be cured (converted to normal villagers) by first giving them the Weakness effect, which can be applied by:

The weakened zombie villager must then be healed by using a (non-enchanted) golden apple on them. A sizzling sound is heard, the zombie villager begins to shudder, and its eyes turn red to signal that curing is in progress. An internal countdown timer is then started, counting down the total time to cure.

Time to cure is initially 2000 ticks (nominally, 100 seconds or 1m 40s) in Bedrock Edition or a random integer between 3600 and 6000 ticks (180 to 300 seconds, 3—5 minutes) in Java Edition. On each tick, there is a 1% chance for the game to look for cure accelerants. It checks each block within a 9×9×9 cube centered on the villager for either an iron bar or a bed (either half: they're detected separately). For each one found up to 14, there is a 30% chance of decreasing the countdown timer by 1 more tick. Therefore, having at least 14 half-beds and/or iron bars within range speeds up conversion by an average of 4.2%.[1][verify]

During the curing process the zombie villager behaves like a normal zombie except that it gains Strength (with a potency that doesn't depend on the difficulty level). Thus, a zombie villager is more dangerous during curing than at other times.

At the end of the curing process, the zombie villager transforms into a villager. If it was holding any item it picked up, that item is dropped. If it was a baby before it was transformed into a zombie villager, it remains a baby after the cure. If it had traded with a player at least once, it recovers its former profession and inventory of trades. Otherwise, it recovers its profession but might immediately change it if it finds and claims a workstation block for a different profession.

A newly-cured villager, if it had a profession prior to being zombified, offers a trading discount to the player who administered the cure. These discounts are permanent. If a villager is cured more than once, the discounts get deeper until the price reaches the minimum of one emerald. Villagers near the cured villager are also affected but offer fewer, smaller discounts.

Zombie villagers that are in the process of converting do not despawn if the player moves far away from them, but like all monsters, they despawn if the difficulty is changed to Peaceful.

Zombie villagers have entity data associated with them that contains various properties.

Note: Zombie villagers have new textures and sounds as of Village and Pillage.

Issues relating to "Zombie Villager" are maintained on the bug tracker. Report issues there.