Edit
watch 28:07
Minecraft Interactive Experience
Do you like this video?
Play Sound
This article is about zombie variant of horse. For skeleton variant, see skeleton horse.
Zombie Horse 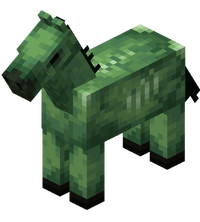 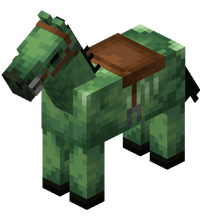 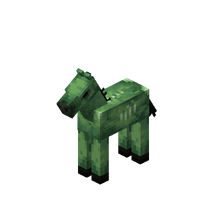 A zombie horse is an unused variant of the regular horse.

Zombie horses may be created by the /summon command or with their spawn egg. When using a spawn egg, 20% spawn as foals. In Bedrock Edition, zombie horses can be spawned with a spawn egg.

Zombie horses appear to be the horse equivalent of zombies. Like zombies, zombie horses are green-skinned and their eyes are completely black.

If saddled, they drop their saddle.

Tamed and saddled zombie horses can be used as one of the fastest means of transportation in the game. They can also be used to climb hills and jump fences.

Once a horse is tamed and saddled, the player can control it with directional controls, jump, and the mouse. The player dismounts using the dismount control.

A player can use any item while riding a horse, including drinking or throwing potions; activating doors or redstone devices; using chests, crafting tables, and furnaces; breaking and placing blocks; and attacking with melee weapons or bows.

A ridden horse automatically runs up any one-block-high slope. The horse and rider can safely fit through a space as low as 2.75 blocks high. Lower clearance risks suffocating the rider if the rider's head enters a non-transparent block. The horse itself can enter gaps as low as 1.625 blocks high, but may itself take suffocation damage when clearance is less than 1.75 blocks. Horses cannot fit through a 1-block-wide gap.

When a player rides a zombie horse, both are unable to use Nether portals.

Zombie horses roam idly, occasionally stopping to rear, swish their tails, or lower their heads as though eating the grass. Unlike sheep, the eating animation does not actually cause any grass to be consumed. If a player comes near, the horses may turn to look at them.

Zombie horses, like most mobs, can ride in minecarts and boats.

Zombie horses cannot be tamed. However, a tamed zombie horse can be summoned using /summon minecraft:zombie_horse ~ ~ ~ {Tame:1b}.‌[Java Edition only]

Zombie horses are spawned with constant health of 15, speed of 0.2, and have a jump strength ranging from 0.4–1.0, tending toward the average 0.7.

This page would benefit from the addition of more sounds.
Please remove this notice once you've added suitable sounds to the article.
The specific instructions are: movement sounds

Zombie horses have entity data associated with them that contain various properties.

Zombie Horses are an unsupported mob and as such issues relating to them may not be fixed.