This page describes an edition of the game that has been officially discontinued.
This edition is no longer updated or available for digital purchase, but can still be purchased physically.
Xbox One Edition 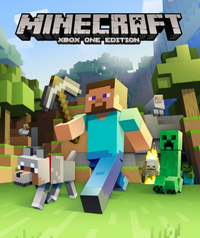 Minecraft: Xbox One Edition is the Legacy Console Edition of Minecraft developed by 4J Studios and Mojang Studios for the Xbox One.[13] It was announced on June 10, 2013 at Microsoft's press conference at E3 2013 and was available for purchase on the Microsoft Store for $19.99 between September 5, 2014 and September 20, 2017.[14] Existing digital owners are still able to access, re-download, and play this version. A retail version was released on November 18, 2014 and can still be purchased. DLC for the game is still available on the Microsoft Store. Like Nintendo Switch Edition and PlayStation 4 Edition players, Xbox One Edition owners have the option to download the Bedrock version for free, however not all DLC will transfer.

Compared to Xbox 360 Edition, Xbox One Edition includes world sizes up to 5120×5120 blocks (36 times larger), 18 chunk render distance, amplified worlds, and other enhancements offered by the Xbox One. Xbox One Edition has all Legacy Console Edition exclusive features, the most notable being Mini games.

Initially, Xbox One Edition was planned to no longer receive updates following the release of Bedrock Edition on the platform, starting with the lack of an equivalent update to TU58. However, Xbox One Edition later received CU50, an update adding the MINECON Earth Skin Pack, and eventually resumed updates entirely with CU51, an update equivalent to TU60 which also added all the features from TU58.

As of CU58, Xbox One Edition has not received new feature updates, such as the Update Aquatic, Village & Pillage, Buzzy Bees, Nether Update, Caves & Cliffs and so on.[15] Xbox One Edition is playable on Xbox Series X|S via backwards compatibility.[16]

Xbox One Edition's most recent feature update is the World of Color Update.

In default settings, the controls are always displayed on the HUD. The controls for Xbox One Edition are similar to Xbox 360 Edition.

The following DLC is included in Xbox One Edition Holiday Pack:

The Minecraft Marvel Skin Packs Bundle was DLC released exclusively for the Xbox 360 Edition and Xbox One Edition on November 30, 2015, which contains all of the Marvel Skin Packs at a discounted price.[19] The bundle was removed from the Xbox Marketplace on December 21, 2015 and is no longer available.[20]

The following DLC is included in the Minecraft Marvel Skin Packs Bundle:

Note: As with the Xbox 360 Edition trailer, this one was also created by Hat Films.[21]