This page documents an unreleased version.
While there is proof of this version's existence, it was never released to the public.

This article's name is unofficial.
An official name is yet to be given to the subject matter. Please add an official name when reliable sources confirm it.
GDC 2012 Build 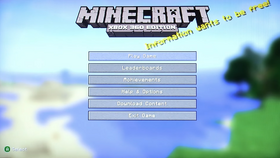 The GDC build was a developer version of Xbox 360 Edition showcased at the Game Developers' Conference 2012.[1][2] This version is based off Java Edition Beta 1.6.6.