This article needs to be updated.
Please update this page to reflect recent updates or newly available information.
Wolf

Wolves are neutral mobs that can be tamed.

Wolves spawn naturally above grass blocks, dirt or podzol in forests, taigas, giant tree taigas and snowy taigas, along with all variants of these biomes (with the exception of flower forests), in packs of 4, where 10% spawn as pups.

Naturally-spawned wolves are untamed and become hostile if attacked by the player.

Adult wolves drop 1–3 when killed by a player or tamed wolf. A tamed wolf that is killed by its owner still drops experience.

Upon successful breeding, 1–7 are dropped.

Like other baby animals, killing a pup yields no experience. 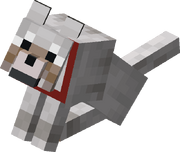 A tamed wolf "begging" the player for food.

Wolves exhibit three different states depending on how the user interacts with them:

A wolf becomes hostile to a player or other mob that attacks it unless the attacker is the wolf's owner or is otherwise on the same team. It also causes wild wolves and standing tamed wolves in a 33×33×21 cuboid centered on the attacked wolf to become hostile to the attacker, allowing coordination for attacks, and team hunts (only in Wild Wolves).

Skeletons and their variants, foxes, baby turtles, and passive rabbits actively avoid both tamed and wild wolves. Killer rabbits‌[JE only] attack wolves actively. Sheep ignore wolves, but flee when attacked by one.

When the player holds meat or bones near a wolf, the wolf tilts its head as if to 'beg' for the food.

The behavior of pups is the same as tamed wolves. Pups have larger heads, similar to other animal babies.

In peaceful difficulty, hostile wolves deal no damage to the player.

A wolf shaking off water.

Standing tamed wolves wander randomly when near their owner, but follow if more than 10 blocks away, and teleport to a nearby free block (if any) if more than 12 blocks away. Besides making travel easier, teleportation can be used to rescue them from lava, water or pits, as they immediately teleport to a safe area.

Tamed wolves teleport to their owner, if they are more than 12 blocks away, with a few caveats.

A wolf does not teleport:

Wolf teleportation is completely silent; this is not an oversight.[2]

A group of begging wolves.

A wolf can be tamed by feeding it bones. Once tamed, a wolf does not accept any more bones. Note that the number of bones required is random – each bone has a 1⁄3 chance of taming the wolf.[3] If the wolf is tamed, it receives a red collar and, in Java Edition, sits if not swimming. There is no limit[4] to the number of wolves the player can tame. A wolf's tail rises and lowers depending on its health. The exact health of an individual wolf can be determined by measuring the angle between its hind legs and tail. The angle indicates the percentage of health that the wolf has. Tamed wolves whine when they have low health (below 10

). Wild wolves have a maximum health of 8

, so their tails always remain significantly lower than those of tamed wolves. Tamed wolves can be healed by feeding them any sort of meat other than fish;‌[Bedrock Edition only] listed below, this restores as much of the wolf's health as the same food would restore hunger points when eaten by the player.‌[Bedrock Edition only].

The wolf cannot be tamed if it is hostile or already tamed.

Wolves that are tamed by the same player can accidentally attack each other while attacking another mob, leading to a fight.

Wolves do not get food poisoning, so they can freely eat rotten flesh, pufferfish or raw chicken. Feeding a tamed wolf that is already at full health usually starts the "love mode" animation.

A tamed wolf's collar color can be changed by using a dye on the wolf.

Tamed wolves at full health can be bred with any type of meat, including rotten flesh and raw chicken without causing the Hunger effect. There is a 5-minute cooldown for breeding, during which the wolf does not accept meat.

The growth of pups can be slowly accelerated using any type of meat. Each use takes 10% off the remaining time to grow up. Unlike healing, breeding and speed growth cannot use rabbit stew or any type of fish.

If the player attacks an untamed wolf and then feeds it, hearts appear as when entering breeding mode, although the wolf does not breed and remains aggressive toward the player.

Wolves have entity data associated with them that contain various properties.

Wolves when they were in development uploaded by Jeb as shown below.

Issues relating to "Wolf", "Wolves", or "Dog" are maintained on the bug tracker. Report issues there.