The Wither Storm is a destructive version of the Wither in Minecraft: Story Mode. It sucks blocks and mobs to make it bigger and stronger. It eventually becomes a giant monster with 5 tentacles and three heads that can fire a tractor beam

It is built by using the same blocks and shape to construct the Wither, but the top-center soul sand is a command block. After spawning, it creates a large explosion and idles for a few seconds. During this time, the eyes are closed and it neither moves nor attacks, but is also invulnerable. After that, it's eyes open and it starts attacking. It can now take damage.

The Wither Storm attacks by shooting black blocks that explode violently on impact. It targets any mob or player insight. It will begin to also suck blocks, therefore making it bigger and more powerful. 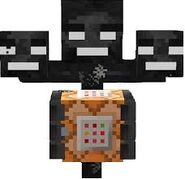 A wither storm in its first stage
Add a photo to this gallery
Retrieved from "https://minecraft.fandom.com/wiki/Wither_Storm?oldid=240642"
Community content is available under CC-BY-SA unless otherwise noted.