This article is a work in progress.
Please help in the creation of this article by expanding or improving it. The talk page may contain suggestions.
Notes: additional celebrate sounds
For the mob in Minecraft Dungeons, see MCD:Witch.
Witch

The witch is an uncommon hostile mob that uses harmful splash potions as ranged weapons and beneficial potions on itself. Witches also spawn during raids, and throw healing splash potions at illagers.

Solitary witches spawn in the Overworld at a light level of 7 or less. They can spawn in all land biomes except mushroom fields. Witches are the least common of the non-biome-specific monsters.

Shows the side of a swamp hut, also shows the scale of it, and proper height.

Shows the top of a swamp hut, shows the scale of it, as well as the spawning zone. The spawn area matches the roof, plus the porch.

Every swamp hut spawns a witch and a black cat inside during world generation, which never despawn. Otherwise, in Java Edition only witches (which may despawn) spawn in the 7×7×9 (x×y×z) volume that is the hut. This is the size of the roof and one block over the porch, from one level below the floor of the hut to two blocks above the roof. In Bedrock Edition, witches respawn on only one block within the swamp hut.[more information needed]

When lightning strikes within 4 blocks of an adult villager or baby villager, it transforms into a witch. A witch transformed from a villager cannot despawn, and cannot be changed back into a villager.

Witches can spawn as part of raids starting from wave 4 in Bedrock Edition, or wave 3 or 4 in Java Edition depending on the world difficulty. They throw potions of healing at illagers.

Witches have the largest loot table of any mob in the game.

If a witch is killed while drinking a potion, the potion has a 8.5% chance of dropping, increased by 1% for every level of Looting.

They can drop one of the following:

Despite being similar in appearance to villagers, witches cannot open doors or use cauldrons.

Witches target players within 16 blocks. They use potions in combat, throwing splash potions offensively and drinking normal potions defensively. These potions are the same as ones obtainable through brewing, i.e. they have the same potency and duration. They attempt to stay within 10 blocks of their target.

They are passive toward villagers and wandering traders.

In Bedrock Edition, witches can locate targets even if they are behind blocks and are hostile to iron golems.

Each potion is thrown in a 3 second interval.

On each tick (0.05 second) when the witch is not already drinking a potion, it may choose to equip and drink a potion. Drinking the potion takes 1.6 seconds and slows down its walking speed. It does not attack during this time.

In Java Edition, witches are 85% resistant to some types of magical damage, including Poison, Instant Damage, evoker fangs, and the Thorns enchantment. They are also immune to their own thrown Harming potions.

In Bedrock Edition, witches are immune to Poison and Fatal Poison.

In Java Edition, witches that participate in a raid seek out illagers and ravagers and throw splash potions of Regeneration (45 seconds), or Instant Health if they have 4

In Bedrock Edition, witches participating in a raid do not heal other illagers, but still attack the player and iron golems.

If the raiders kill all the villagers in a village, witches celebrate their victory by jumping and laughing.

In Java Edition, witches do not retaliate when attacked by evoker fangs, illager-inflicted arrows, harming potions from other witches and Johnny vindicators. Instead, they drink a healing potion. 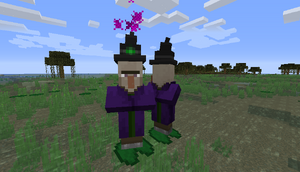 Witches have a 1.5% chance every second to spawn 10–44 purple particles above their heads. These particles are named "Witch" in Java Edition or "Witchspell" in Bedrock Edition.

Witches have entity data associated with them that contains various properties.

Issues relating to "Witch" are maintained on the bug tracker. Report issues there.