This page describes an edition of the game that has been officially discontinued.
This edition is no longer updated, but can still be purchased digitally or physically.
Wii U Edition 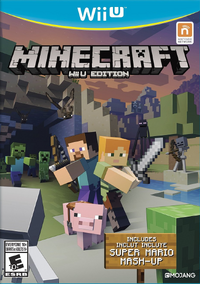 Minecraft: Wii U Edition was the edition of Minecraft developed by 4J Studios and Mojang Studios for the Nintendo Wii U. It was announced on December 7, 2015, and released on December 17, 2015[9] for $29.99 on the Nintendo eShop. A retail disc version was released on June 17, 2016.[1] This edition is bundled with seven add-on packs, and sixteen additional packs are also available as downloadable content. Exclusive content based on Nintendo properties is also available for the game: a mash-up pack based on the Super Mario franchise was released in May 2016.

As of Patch 43, Wii U Edition has not received new feature updates, including Village & Pillage, Buzzy Bees, and the Nether Update that other editions of Minecraft received.

Wii U Edition's final feature update was the Update Aquatic.

In late 2013, Mojang Studios founder Markus Persson announced that there were no plans to port Minecraft to the Wii U, stating that he wasn't aware of any plans but agreed that "a Wii U version would make sense."[10]

In June 2014, Shigeru Miyamoto and Shinya Takahashi were asked about porting Minecraft to the Wii U. Miyamoto stated:

Takahashi followed with his statement:

In September 2014, Mojang Studios' Daniel Kaplan reiterated that there were no plans to bring Minecraft to the Wii U because he claimed that the user base for the Wii U was "very small".[12] This was not the case at the time of this post, as the Wii U was ahead of the Xbox One in terms of sales around the same time.

At MINECON 2015, Mojang's COO Vu Bui was also asked about porting Minecraft to the Wii U. Bui stated:

On November 11, 2015, PEGI accidentally leaked a rating for Minecraft: Wii U Edition. The leaked rating was removed six days later.[14][15]

On December 7, 2015, the game was officially confirmed, and Mojang and Nintendo announced that Minecraft: Wii U Edition would be released on December 17th, 2015.[16]

On May 9, 2016, Nintendo and Mojang Studios announced that there would be a special Super Mario-themed mash-up pack released for Minecraft: Wii U Edition on the May 19 for free.[1] Mojang also announced that a retail version of the game would be released on June 17, 2016.[1]

Wii U Edition features Off-TV Play, which allows the game to be played exclusively on the Wii U GamePad's screen. There is some limited touchscreen functionality, allowing players to select items on their hotbar, navigate through the Crafting menu, and more. When asked about whether the GamePad could be used as a second screen for full inventory management, Owen Jones stated it was not at the moment, but it would be cool.[17] The GamePad was never usable as a second screen. Mii characters can be used as the player's in-game username. In addition to the GamePad, the game is also playable with the Wii U Pro Controller or the Wii Classic Controller.

Wii U Edition comes with six of the "most popular add-on packs" included.[18] This is the reason that Wii U Edition is more expensive than all of the other editions of Legacy Console Edition.[19]

The following DLC is included in Wii U Edition:[18]