Edit
watch 28:07
Minecraft Interactive Experience
Do you like this video?
Play Sound
For the enchantment in Minecraft Dungeons, see MCD:Weakening.
Weakness 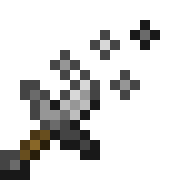 Weakness is a status effect that decreases attack power.

It can be cured by a milk bucket or with elixir‌[Bedrock and Education editions only].

Melee damage inflicted by the affected entity is reduced by 4

In Bedrock Edition, melee damage under the Weakness level n can be found by the recursive formula

is the base attack damage with whatever weapon or tool is used to attack.

This effect is also used to cure zombie villagers, preceding the golden apple.

The effect can be removed by drinking milk. In Education and Bedrock editions when education options are enabled, drinking elixir also removes weakness.

Passive mobs, withers, and ender dragons are immune to Weakness.

Issues relating to "Weakness" are maintained on the bug tracker. Report issues there.