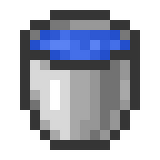 A water bucket is a bucket filled with water.

To fill an empty bucket with water, use it on a water source block. The water is consumed in the process. Flowing water does not fill a bucket.

Using an empty bucket on a cauldron filled with water (water level 3) empties the cauldron and fills the bucket.

Water buckets can also be filled by placing an empty one in the fuel slot of a furnace, and a wet sponge into the oven slot. The bucket is filled when the smelting process completes, which also leaves the sponge dry and ready to be reused.

Using a full water bucket on a solid block places a water source block against that block, emptying the bucket. In the Nether, however, the water evaporates, making a fire extinguishing sound and displays smoke particles while nothing gets placed.

Water buckets can be used on a fish, axolotl and tadpole to create a bucket of aquatic mob.

Water buckets can be used as a means of quickly descending great heights in the Overworld and End, either by creating a waterfall or using the water block while falling to create a safe water landing.

Water buckets can also be used to climb vertical surfaces anywhere but the Nether by repeatedly creating higher waterfalls from the bottom and swimming up them.

Issues relating to "Water Bucket" are maintained on the bug tracker. Report issues there.