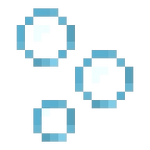 Conduit Power also gives the player a similar effect to Water Breathing (among other things).

Helmets with the Respiration enchantment slow down oxygen depletion, granting an extra 15 seconds of underwater breath per level. However, this is not done through the Water Breathing effect.

Issues relating to "Water Breathing" are maintained on the bug tracker. Report issues there.