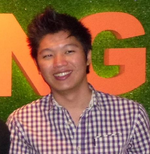 Warren 'EvilSeph' Loo is a game developer who formerly worked for Mojang Studios. The former leader of the Bukkit team, Loo was hired by Mojang to maintain the Minecraft servers and develop the official mod API. Before this was complete, his job capacity was broadened, to include general development. He announced his departure from Mojang on October 2, 2013, stating that he was looking to pursue other interests.[2]

On August 21, 2014, he announced that the Bukkit project would be discontinued due to undisclosed reasons, citing changes to the Minecraft EULA and poor support from Mojang as contributing factors.[3] This decision was later reversed by Mojang claiming to own the project.[4][5][6]