Edit
watch 28:07
Minecraft Interactive Experience
Do you like this video?
Play Sound
Not to be confused with Pillager.
For the mob in Minecraft Dungeons, see MCD:Vindicator.
Vindicator 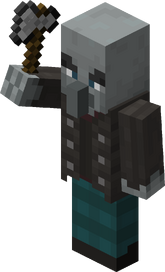 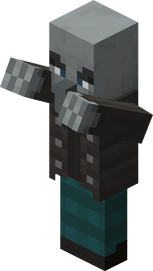 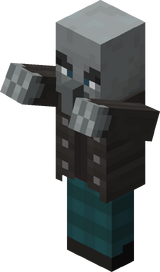 A vindicator is an illager equipped with an iron axe. Vindicators appear in woodland mansions and participate in raids.

On Normal difficulty and Hard difficulty, vindicators sometimes spawn with a randomly enchanted iron axe: the chance is 0–25%, and is higher when the regional difficulty is higher.

Vindicators spawn during the generation of woodland mansions, in groups of 1–3 inside particular rooms, sometimes accompanied by an evoker. Rarely, vindicators can spawn in the corridors and hallways.

They do not respawn after initially spawning. Vindicators generated in mansions do not naturally despawn unless the world is switched to peaceful difficulty‌[JE only].

Vindicators are sometimes neutral if naturally spawned in a woodland mansion, which means that the vindicator does not attack the player on sight, but only after the player attacks it.

In Java Edition, any vindicators can join a patrol if sufficiently near a patrol captain, but do not go seeking out for patrols to join.

Vindicators can spawn during raids. They appear more frequently during later waves and at higher difficulties.

In Java Edition, if a player spawns a vindicator with a spawn egg or using a command, the vindicator has a chance of becoming an illager captain, with a Ominous banner attached above its back.

A vindicator drops loot only when killed by a player or tamed wolf:

In Bedrock Edition, if a vindicator spawns as part of a raid, it drops:

Vindicators are hostile toward players, iron golems, adult villagers, wandering traders, and snow golems.‌[BE only] In Bedrock Edition, vindicators are passive to players on peaceful difficulty.

While idle, a vindicator crosses its arms similar to a villager, with its axe stowed. While giving chase, the vindicator brandishes its axe and sprints. If it has no weapons, it raises an empty hand.‌[Bedrock Edition only] In Java Edition, a mainhand-unarmed vindicator raises both of its hands when attacking, similar to a zombie.

On Normal and Hard difficulties, raiding vindicators can break wooden doors. This is controlled by the raider tag.[1] Like any illager during a raid, vindicators celebrate by cheering if all the villagers are killed or all the beds are destroyed.

Vindicators look at the player in Creative mode like villagers do, but they might stop looking at the player after looking for a while or when it sees a target.

Vindicators can find their targets regardless of distance, whereas most other illagers attack on sight.

Vindicator raiders can breaks doors and open doors like villagers.

A vindicator can disable the player's shield with its axe attack, even when riding a mob. If a player fails to land a melee attack on a vindicator that rides a ravager during a raid in Hard difficulty, the vindicator rider can deal great damage to a player without protection from a shield.

A vindicator's axe can break, just like pillager crossbows.

Vindicators can only sprint, even when idle.

A dispenser can equip a vindicator with armor. Helmets and chestplates are partially visible due to the irregular shape of the vindicator compared to the player. Leggings and boots render normally, although they do not move when the legs move. Heads can also be applied, however carved pumpkins cannot. In Bedrock Edition, a chestplate's sleeves move as if they were being worn by a player.

× 9.75 damage, depending on difficulty. They tie with piglin brutes for dealing the third heaviest melee hits in the game, following the iron golem at 21

× 22.5 damage. Multiple vindicators can spawn in a location, making mansions and raids dangerous even for seasoned players.

The vindicator's axe attack disables the player's shield for 5 seconds, even when riding a mob.‌[JE only] Because ravager attacks also disable shields and deal heavy damage, ravager-mounted vindicators are especially dangerous.

A vindicator named Johnny (using a name tag, named spawn egg, etc., or has its Johnny tag set to 1b) is hostile to every mob except evokers, pillagers, other vindicators, and ghasts[3]. In Bedrock Edition, they further exclude ravagers[4]; and in Java Edition, they exclude baby villagers, illusioners, armor stands[5], and players in Creative or Spectator mode. This hostility extends to vexes in both editions.[6]

Naming a vindicator spawn egg "Johnny" and using it on a spawner has no effect; normal vindicators spawn rather than vindicators named "Johnny".‌[BE only]

Vindicators also have entities' data associated with them that contains various properties.