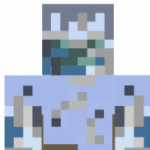 Based on some information I found, I don't like the idea of Notch being back in Minecraft. Just because you are the creator of a great game, it doesn't mean you are a great person.

I don't have Pocket Edition no more, as a result of getting Wii U edition. In the future I hope to upgrade to Nintendo Switch, because I want to ransfer my world and not start all over.

Hi, I am Heroic Craft Whale!!!  I currently only own Minecraft Pocket Edition on my computer, but soon

I am hoping to have Minecraft Java (in the next 10 years or so...)   I am going to build a Netherbrick

Adding some special graphics, like soaring eagles (All biomes except desert and beach) and Desert soaring vultures and beach soaring seagulls.

Adding some graphics, like tiny snails and slugs on grass blocks and dead bushes and etc when it rains (cannot kill them, just for decoration).

Adding POTION OF ENCHANTMENT - you will have your items temporarily enchanted for 3-8 minutes (Only if you are holding them at the time) - Only found in end cities - NOT CRAFTABLE!!!

To be honest, I used to badge milk, which I have found out is wrong, so I do not do it any more.  Neither should anyone else, unless if it you actually have TONS and TONS of new info that corresponds with Minecraft and must be something already verified with Mojang  AB TM.  Also do not focus on a single page.  Thank You:)

I have found a cool new youtuber!  His name is CubFan135!!!  He has cool videos about things you didn't know about Minecraft and SO MUCH MORE!!!

The Drowned is one amazing monster.  It is my favorite, which is also tied with the Husk.  So, if their is any post about a survey, choose the Drowned, because it is the most revolutionary monster ever in Minecraft!

It would be so cool if Notch came back to Minecraft, and co-regained his title as the lead developer in Minecraft, alongside Jeb!!!  Don't you agree?

I do not like the idea of the beast or crossbow, because it just ruins the game.  I do not want them to add this in Minecraft.  I also do not like berries in minecraft, they need to focus on new blocks, not foods, unless it is like a simple sandwich, 1 bread one meat/carrot.   I definately hate the idea of campfires, it is just too complex, and way too life-like.  We Minecrafters want simple, happy things, not beasts, so many new berries, pillagers, and what not.  Who is with me, do we or do we not want simpleness in Minecraft?

6) Conglomerate (blocks, stairs, and slabs; can be smelted in a furnace to get smooth conglomerate)

8) Torches Light Up areas when in a player's hand

14) Eagles/Hawks soar in the sky in every biome (except desert [vulture] and beach [seagul]), just for visual effect

15) Toasting bread in a furnace results in a toast; Toasting carrots will produce a baked carrot

18) Ore pillars biome (rarer than mushroom island; has all ores above ground; stone equivalent to ice spikes [except that it is rarer])

28) Tundra Clothes  (you get to see the crafting recipes later)

30) UFOs and Meteors in the Night Sky (these are only visual, are not actual entities)

46) Chicken Babies are yellow or grey

47) Feathers, Sticks, And Flints can be dropped by Skeletons

52) Villager Pirate Skeletons can be found in sunken ships

55) Caves can grow stalagmites and stalagtites

56) Poison Mushrooms can be found in caves biomes, and can be used to make potion of insta-kill, which, just like it says, instakills andything that touches it (Has No Effect On The Dragon, Wither, Guradians, Blazes, Cats, Ocelots, Or Large Slimes)

57) Hydration bar (Just Like The Food Bar, But You Need To Drink Water To Keep It Filled, Milk is ineffective, and eating bread will cause it to go down quicker, as the bread absorbs your moisture.)

58) Bake Bread in A Blast Furnace to Make Toast

61) New Soil Block Guano Found in Caves with grey bats and can be mined as a fertilizer for plants, works 2 times better than bonemeal (Rare, but when found comes in massive quantities that layer like snow)

68) Reeds That Grow Near Lakes, Variant of both Sugar Canes and Tall Grass

80) Liquid Mud Block, Extremely Thick, Hard To Get Across

86) Swords Can Be Used To Block Another Sword

91) Trees can regrow their leaves, until cut down

92) Acorns can be cooked into 'Baked Nuts', or composted

93) Villagers have Ahh! SFX when being attacked

94) Minecarts can be attached to animals, and they can pull your cart

97) New Herder Villager (Has a herd of sheep and llama, up to 7 animals)

98) Llamas can be found in villages, where a herder villager takes care of them

99) Squids are renamed 'Octopus', and stay the same in appearance, but have specks of maroon

114) When Crown, Robe, Legs, and Sandals are worn, and Sceptre is in hand, Sceptre summons Lightning

121) Ghost villages with no villagers

123) The Dragon has a more dramatic death

124) All of the textures in the End are darkened, besides the glow of Enders, Shulkers' heads

126) Beds can be layed upon during day, but no sleeping is involved

127) When in water, you get the "Dripping Wet" status effect

The best biome to build a house in would be a Mushroom Biome Island, but first you must collect lots of wood before builing.  You will need tools, even though their will be no monsters spawning here, you may want to mine, or kill monsters long distance.

I think that the ravager should come with a new face, because one with a villager face is like a horror show, and not the good kind.

Retrieved from "https://minecraft.fandom.com/wiki/User:HeroicCraftWhale46?oldid=190743"
Community content is available under CC-BY-SA unless otherwise noted.