From Minecraft Wiki
< User:Delvin4519
Jump to: navigation, search
This article is about a feature that has been significantly revised and updated in Java Edition 1.13, 1.14, 1.15, and 1.16.
This article had been updated to somewhat mirror the actual Minecraft wiki page of "Biome" as of 31 January, 2018, and will not be updated further. Any information for features in Update Aquatic or newer should not be added in this particular userpage. 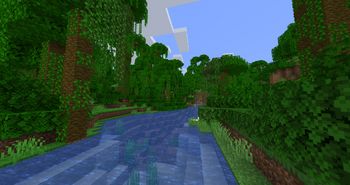 A river bisecting a jungle biome. At the top right is a forest. 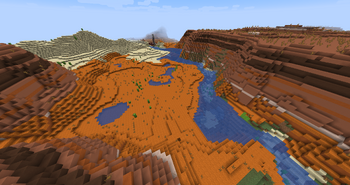 A river running through a mesa biome with mesa plateaus, with a savanna biome in the bottom right. 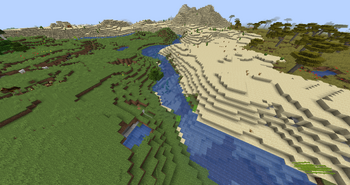 A river running through a desert and forest.

Biomes are regions in a Minecraft world with varying geographical features, flora, heights, temperatures, humidity ratings, and sky and foliage colors. Biomes separate every generated world into different environments, such as forests, jungles, deserts, and taigas.

Biomes have a temperature value that determines if it snows, rains, or does not have either. The required values are less than 0.15 for snow, 0.15 - 0.95 for rain, or greater than 1.0 for neither. These values can be used to determine the heights that snow generates in different biomes. The temperature also drops 0.00166667(1⁄600) per meter above the default sea level (Y=64), but does not change below sea level. For example, extreme hills generate snow at Y=95, due to highland climate, as the base value is 0.2, and savannas do not experience rain or snow due to their heat. The "sea level" setting of a customized world does not affect this.

Biomes are split into 5 categories based on their temperature: snow-covered, cold, medium, dry/warm, and neutral. They were separated to prevent biomes with huge temperature differences being placed side-by-side (such as cold taiga next to a desert), and to allow biomes with similar temperatures to be placed next to each other more often. (Such as forest and swampland)

There are 38 main biomes in the Overworld (with two being unused), one in The Nether, one in The End and 22 technical biomes, bringing the total number to 62 distinct biomes. Biomes can be distinguished by the grass and leaf colors in the biome, along with the types of blocks present (e.g. types of trees or other plants like cacti, sand coverage in deserts). Biomes are pseudo-randomly generated using the map seed.

Biomes are separated into 5 categories. The snow-covered biomes are marked in blue, cold in green, medium/lush in orange and dry/warm in red. The biomes which are not labeled are either neutral or unknown. Temperatures are given at sea level.

In these biomes, it snows at any height. The foliage and grass is a dark aqua-green.

In these biomes, it begins to snow over a certain height, but before the 256 block height limit. Otherwise, it rains. The foliage and grass is an aqua-green.

In these biomes, it neither rains nor snows at all, but the sky will still turn overcast during inclement weather. The foliage and grass is an olive color, except mesa biomes, which have brown grass.

These biomes no longer generate naturally, but still exist in Minecraft's code, and can be accessed by using the Custom world type.

The temperature and rainfall values of a biome are used when determining the colors of grass, foliage (excluding the stalks of flowers), and other features such as water and the sky.

Biome grass and foliage colors are selected from two 256x256 colormap images: grass.png and foliage.png. Both colormaps, shown to the right, can be found in assets\minecraft\textures\colormap. The grass.png colormap sets the colors for the grass block top and sides (along with other types of grass, such as tall grass, ferns, double tall grass, etc.). Meanwhile, the foliage.png colormap sets the colors for tree leaves (with the exception of spruce and birch).

Biome colormaps use a triangular gradient by default. However, only the colors in the lower-left half of the image are used, even though the upper-right side of foliage.png is colored. Furthermore, as shown in the template image to the left, only select few pixels are considered when the colormap is read by the game, and are determined by the code below.

"clamp" limits the range of the temperature and rainfall to 0.0-1.0. The clamped rainfall value is then multiplied by the 0.0-1.0 adjusted temperature value, which brings its value to be inside the lower left triangle. Some biomes' ranges are shown in the template above; the multiplication makes all the line segments point towards the lower right corner.

At borders between or among biomes, the colors of the block and its eight neighbors are computed and the average is used for the final block color.

Exact temperature and rainfall values for biomes can be found in various projects, e.g. this biome code.

Certain biome colors are hard-coded, which means they are locked into the Minecraft code and are not retrievable from any texture file. Thus, they cannot be modified without the use of external tools, such as MCPatcher/OptiFine, that support the use of custom colormaps.

Swampland temperature, which starts at 0.8, is not affected by altitude. Rather, a Perlin noise function is used to gradually vary the temperature of the swampland. When this temperature goes below -0.1, a lush green color is used (0x4C763C) otherwise it is set to a sickly brown (0x6A7039). In addition, the color of the water in swamplands is always multiplied by a very light green tinge (0xE0FFAE).

The roofed forest biomes' grass color is retrieved normally, then averaged with a dark green color (0x28340A) to produce the final color.

All mesa biomes' grass and foliage have hard-coded colors, which are two tan colors (0x90814D and 0x9E814D respectively). These are not modifiable by grass.png and foliage.png, and are unaffected by temperature.

Several other biome colors are set into the game and currently require external tools in order to be changed. This includes blocks such as birch and spruce leaves and water (which have a hard-coded overlay set onto them), and other features such as the sky and fog.

A very old image of biomes work-in-progress. "To the right of the player is a taiga, to the left is either a forest, or woods, I can’t remember. In the distance is probably tundra." ~ Notch

Issues relating to "Delvin4519/Biome" are maintained on the bug tracker. Report issues there.