The creation of nether portals can be used for a variety of different means. This page lists some of the implications of these portal mechanics.

Overworld portals can go a long way, one way. 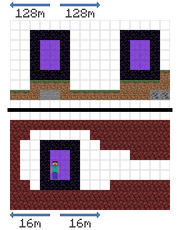 Nether portals go a relatively short distance; only the left Overworld portal is in range.

Portals try to avoid spawning over lava, in midair, or inside rock, but they do so by spawning nearby. Thus, a new portal from the Overworld has a disproportionate chance of being next to an abyss, lava lake, or netherrack wall. There is also no check as to whether a lava source (created with the landscape) is destined to send lava flowing over the portal. Furthermore, a portal can spawn on a one block thick ledge or floor, or on a Soul Sand outcrop.

Portals built in the Overworld should be secured in order to prevent wandering monsters from entering the portal. These creatures can accumulate over time inside the Nether, which will keep them alive due to its lack of sunlight. Mobs such as creepers are especially bad to handle in the Nether due to the soft nature of netherrack and the abundance of lava to fall into.

Creating a portal without getting obsidian[edit]

Nether portals can be built without the use of a diamond or netherite pickaxe to mine obsidian by placing lava in a mold of other blocks and then pouring water over it to turn it into obsidian.

A quick, simple method using a lava pool, water bucket, and some blocks[edit]

You will only need at least 6 blocks, a water bucket, a lava pool, and a flint and steel(or other lighting method). A block breaking tool is recommended.

If the bottom two blocks are made of obsidian (as shown in gif):

Good, everything is going fine, as you will need all 4 of the obsidian so far. Continue to step 5.

If the bottom two blocks are NOT made of obsidian:

Because you are missing those bottom blocks, which are supposed to be obsidian, you need to destroy those blocks. After destroying those blocks, fill them with lava and use flowing water to solidify them with obsidian. Once you have all 4 obsidian blocks there, you can continue to step 5.

5. Place those two blocks, as shown in gif.

6. Place those four blocks, as shown in gif.

7. Place water as shown in gif.

8. Grab the water and light the nether portal with a flint and steel. To get that, you will need gravel and iron

This page describes content that exists only in outdated versions of Minecraft.
The portal search range has been changed.

As a result, overworld portals that are within 1024 distance of each other on both X and Z axis are almost always going to link to the same Nether realm portal on initial construction, unless more precisely paired portals are built.

To set up pairs of Nether portals properly so that they reliably travel to each other, it is best to build both portals manually. Build at desired location X,Y,Z in the Overworld. Then travel to the Nether. And then dig your way to X/8, Y, Z/8, and build a portal there.

A less precise method would be to temporarily deactivate all portals within a 128 block "radius" from within the Nether. Through death or with the aid of a second player, entering a new portal from the Overworld will force the creation of a new portal within the Nether which the Overworld portal should prefer. This is not recommended as it limits how close Overworld portals can be placed due to the zone of exclusions and can lead to unpredictable placement of the resulting portal.

The Y coordinate is not divided for pairings, however it does play a factor in mapping the portals. Therefore, two Overworld portals could be built at the same x,z coordinates with one at a very low Y, e.g., 5, and one at a higher y, e.g. 160, then a portal could be built in the nether at a Y closer to the upper Y, e.g. above 83, and the nether portal will always exit at the higher overworld portal but both Overworld portals will link to the same nether portal. This allows an easy access to something high in the Overworld such as a floating iron golem farm or mob farm AFK area. This phenomenon can also cause strange behavior if two portals that are close together (within 300 blocks) in the Overworld are mapped to the correct x,z coordinate in the nether but at drastically different Y coordinates as the portal chosen when entering the nether will be the shortest euclidean distance.

The Nether portal spawning algorithm can only spawn portals that are within a 33×33 block column centered on the destination. This will often cause it to spawn a portal at a location significantly different than the corresponding location in the other world. The larger the distance between two linked portals, the larger the zone of exclusion. This zone is the area in each world where you cannot build another portal without breaking the link between the first two portals. One way to think of this zone is as spheres around each portal, each of a true radius equal to its distance to the other. For example, if the Overworld portal was at (0,50,0) and the Nether portal at (0,100,0), then each portal is 50 meters away from the other. In this (simple) case, if a Nether portal was built closer than 50 meters to (0,50,0), then the Overworld portal will now link to it.

If you wish to ensure that two portals link together, manually build portals as close as possible in all 3 coordinate axes. It doesn't have to be exact, or even all that close, if the player ensures that no other portals will be constructed in the exclusion zone created by the difference.

It is possible to end up in a situation where a Nether portal "randomly" places the player in 1 of 2 possible Overworld destination portals. This is simply because the Nether portal has two effective coordinates as it is 2 blocks wide, say (X, Y, Z) on the left, and (X+1, Y, Z) on the right. If the player entered on the left side, (X, Y, Z) translates to (X*8, Y, Z*8) in the overworld and the game picks the portal closest to that. If the player entered on the right side, (X+1, Y, Z) translates to (X*8+8, Y, Z*8) and the game picks a portal closest to that point instead. This situation occurs when the Nether portal's location is roughly equidistant between the 2 Overworld portals (within 8 blocks overworld distance difference). However, building 2 Nether portals side by side is probably better for destination clarity than building a 2-in-1 portal. It is possible to span distances with pairs of portals in this way, though normally faster to simply walk through the Nether.[1]

Spawning a portal in the air[edit]

It is possible for a destination portal (either in the Nether or in the Overworld) to spawn floating in the air. If your portal spawns in the air, it will generate a 1×2×1 obsidian platform in the front and back of the portal. This can only occur if there is no possible spawn location in the entire 33×33×255 column of search region to find a suitable spot to place a fresh new portal 'and' there are no existing portals within the 128 block "radius" to link to.

Portals can be built-in networks[edit]

You should build portals at (this is the maximum ideal distance, but they can be built as close to 16 Overworld blocks apart, if the coordinates are accurate) 64 Nether block intervals, even if you are not normally going to use these gates. This is so that if you use Nether portals for long-distance travel, and your usual Overworld destination portal becomes inaccessible for some reason, (due to large gravel cave-ins, lava, water, or you have an automated activation system and forgot to turn it on) you will still have a reasonably close backup gate, which will get you back into your gate network.

The portal choosing algorithm can be used for long-distance travel by manual construction at carefully selected coordinates. If the player has a portal in the Overworld at (0,64,0) but makes a Nether portal at (127,64,127) with its perfect Overworld pair at (1016, 64, 1016), then the portal at (0,64,0) will go to the Nether portal correctly (1-way trip) because it is the only portal available within the 128 search distance along X and Z horizontal axes of the expected Nether portal position of (0,64,0). In about 15 seconds, the player can then travel 1436 meters in the Overworld. This specific form of fast travel by portal is one-way, since the Nether portal will not find this Overworld portal. Given that a railway in the nether would need to span only 180 meters to go this distance, it is usually not worth making such portal links. However, it is theoretically possible to make a one-way ring of portals, with each Overworld to Nether jump going a long distance, but such a ring would easily be disrupted due to the huge exclusion zones created.[2]

The Nether portal is an also entirely viable, two-way replacement for the water or conventional ladder.[3] Note that if you want to travel a vertical distance of h from a point (X, Y, Z) in the Overworld to (X/8, Y+h, Z/8) in the Nether, there must be no other Overworld portal at any point (x, y, z) within a distance of 8*h from (X, Y, Z) (i.e. within the spheroid ((x-X)/8)² + ((y-Y)/1)² + ((z-Z)/8)² = h², note that Y is not divided by 8). That is, if you want to travel large vertical distances, there must be no horizontally close portal. (This holds for a portal from the Overworld to the Nether. The reverse direction (Nether to Overworld) was not discussed here.)

With some luck, making a portal underground, entering the Nether and making another portal out of the other's proximity may create a portal in a stronghold, a cavern or even an abandoned mine shaft, all of which may contain a variety of rare minerals. (even diamonds, but the starting portal must be built under layer 16.)