When players build important structures in other biomes, they often travel to these structures via minecart, boat, elytra, riding a horse, or by walking; however, a much quicker alternative is to use a nether portal.

Once you've made two nether portals in the Nether connecting to two different places in the Overworld, you can make a minecart railway or a boat-way made of packed ice or blue ice to get from one to another for even quicker travel.

Assuming you already have access to the Nether, you will need the following materials for a single linked portal:

You will also need to know how the coordinate system works.

The most straightforward way to connect two Overworld locations for faster travel via the Nether is as follows:

1. Find the coordinates of the portal you want to use, then divide the X and Z values by 8. Note these divided values, along with the unchanged Y value.

2. Enter the Nether via a (relatively) far-away portal, bringing materials to build and light a new Nether Portal.

3. Head to the divided coordinates in the Nether. Try to place yourself at about the same Y coordinate (elevation), then make a second portal. You should come out at about the location you wanted to go.

4. (optional) Move your exit portal to the location corresponding to your Nether portal. (Multiply the X and Z coordinates by 8.) This makes it less likely that new linked portals will attempt to link to this existing portal.

(Note that this method can have problems with linking to existing portals that are nearby the target destination.)
(If the portal links to an existing portal, you may need to travel to the target location on foot. Don't worry - portals 'forget' their links every 60 seconds.)

The above method does not let you choose exactly where your second portal appears in the Overworld, and is more likely to link to an existing portal that is already nearby your target destination. This method allows you to do so, but is more expensive and time-consuming as it requires you to build an extra portal at your desired exit coordinates. 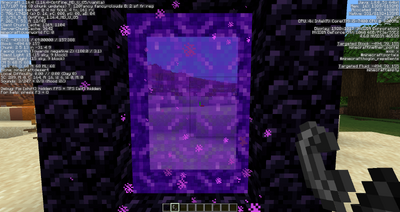 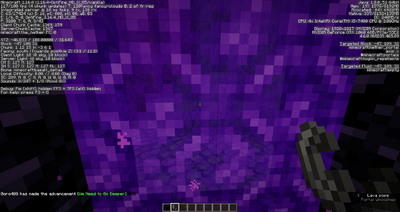 If you have multiple locations in the overworld that you want to be easily accessible, then just travel to the location in the nether, build a portal, and travel through it. You should come out about where you wanted to go. If you have an exact spot you want the overworld portal to go that is close to where the portal generated, you can just remove the overworld portal and build a new one in your desired location. If you are running low on obsidian, you may want to consider taking the corners off of the generated portal. It may not look as nice, but it will give you four extra blocks of obsidian. To improve the look of the portal, place cheaper blocks such as wood blocks or chiseled stone bricks.

If you travel through the nether frequently, mobs such as ghasts and piglins can be a nuisance, as well as the possibility of getting lost at any wrong turn. It may be worth it to install some sort of protection against these hazards. There are many different ways to do this, so you will want to find the one that best suits your needs.

This will require a lot of time and blocks, but possibly one of the best protection against mobs and getting lost. Since you may come across mobs while doing this, it is recommended that you put all of your stuff in a chest except for a stone or iron pickaxe, a lot of ghast resistant blocks such as cobblestone, and a bunch of torches. That way, if you die, you don't lose anything valuable. The exact amount that you bring will be up to how confident you are that you will not die. If you are a beginner, only bring a couple stacks of blocks and torches, but if you are more advanced, you may want to fill up your inventory. You can always return to your base in the Overworld to get more supplies.

To start, get the coordinates of all your portals in the nether and write them down. Pick two portals to do first. Start at one of them, and create a two block wide path along either the x (or z, it doesn't really matter) coordinate until you reach the z (or x if you started with z) coordinate of the second portal. Then turn towards that portal and continue until you get there. Note that if the portals are on different y levels, you may have to use stairs to make the path line up with the portal frame. You should now have a path between the portals.

To connect a third portal, you will need to get as close to it as possible without leaving the path you already created. You should share either the x or z coordinate with the portal. Then you can go ahead and create a path to the third portal. Repeat for any other portals you may have, and then go to the next step.

Now you will want to cover up the paths so you do not fall off or get hit by ghasts while travelling. You will most likely want to have tunnels that are 2 blocks high so that you can sprint-jump through them, so build two block high walls on both sides of the path.

Now take the torches and light up the path. It is ideal to start at your main base and place torches on the right wall so that you can always find your way back if you get lost. If you see any piglins on your path, ignore them, and they will eventually despawn.

Finally, build a roof on your tunnels. If you make it two blocks high, you will be able to go a lot faster by sprint-jumping, but this will use a lot of hunger, so it is best to walk if you're low on food. Once you have done this, your tunnel system is complete!

You can still improve your tunnel in a variety of ways. Try some of these and see which ones you would like to have.

This tutorial is exclusive to Java Edition.

Probably the safest method of fast travel in the nether is also one of the easiest. This uses a bug to the advantage of the player, and only works in Java Edition.

First, you will need to get to the nether roof. There are various different ways of doing this, many of which are listed at Tutorials/Breaking bedrock. Go ahead and break a hole to the nether and put ladders in it with an iron trapdoor on top with a button. Once you have done this, mark the coordinates of the trapdoor so you will always be able to get back there. Now go to an existing portal in the real nether and break it. You may want to relight it later, but for now it will just get in the way. While you are there, mark the x and z coordinates because you will now need to build a portal in that same spot on the nether roof. Use your trapdoor to get back on the roof and travel to the coordinates you just marked. Create a portal there, light it, and step through. You should end up in the overworld at the portal that corresponds to the one you just broke. If you step through again, you should find yourself back on the nether roof. If you don't want mobs spawning on top of the portals, (you probably don't) put slabs or carpet on top to prevent mob spawning. At this point, you have done the minimum and your portal is successfully linked. Repeat for any other portals you have before moving on.

To access the real nether without having to find a trapdoor on the roof every time, you will need to relight the portal you broke in the first step. Travel through it to get to the overworld. Dig down below the existing overworld portal, or make a platform above it and light a new portal. Now the upper portal should link to the Nether roof and the lower one should take you to the actual nether. Repeat as necessary.

It can be easy to get lost in the infinite bedrock on top of the nether, especially if your portals are far apart. To conquer this, use non-spawnable blocks like slabs, torches, signs, or carpet to mark the way. Using solid blocks may result in mobs spawning, defeating the purpose of having the nether roof.

If there are a lot of portals that you want to link up, you can take advantage of the fact that the nether is a 1:8 scale and create a large map of your overworld in the nether that is also at this scale. It requires a lot of time, pickaxes, and blocks, but it is hard to get lost.

To begin, you will need to find the length and width of your map. Get the coordinates of each portal and write them down. Get a piece of graph paper and make rough diagram of where each portal is. Find the area of the entire map for the nether. This is about half the number of blocks you will need.

You will need a flat area in the nether that matches up to the overworld portals. It should be 4 blocks tall so that you will be able to sprint jump along after the final product is finished.

Now you will be making the map. You will want blocks such as green and blue wool/concrete/concrete powder for the land and water, then possibly sand or even gravel for deserts and gravelly mountains. Note that if you are using concrete, you will have to harden it in the overworld before you place it (just a friendly reminder so you don't have your day ruined by realizing that your brilliant plan is not so brilliant.) Hold a map of the area you are working on in your off-hand so you can reference it easily. Remember that each block you place in the nether represents an 8x8 area in the overworld.

After your map is finalized, go ahead and move your portals to the desired locations. You will have to dig up into the ceiling to get the portal to fit. To prevent mob spawning, put glass all over your map. You can still see your map, but mobs will not spawn on glass. The portals should be level with the glass so you can just walk right in. If there is any area where mobs are likely to walk into your map, block it off and use an iron door if you will need to enter/exit. Light up the area around the overworld portals too so mobs do not enter through the portals.

There you go! After many hours of hard work, you have yourself one of the coolest nether hubs ever!