This article needs to be rewritten. [discuss]
It might not follow the wiki's style guidelines. Please help us by rewriting it.
Reason: The article should be about types of mechanisms, not a list of specific examples.

This article uses MCRedstoneSim schematics.
These should be converted to use {{schematic}} if possible.

Mechanisms are systems of blocks used to perform certain tasks, such as opening a door from afar or revealing a hidden staircase. These systems are built from simple components and normally involve some kind of user input, such as breaking a torch, which generates some kind of result, like a door being revealed. Mechanisms can range from simple switches that open and close doors from a safe distance, to complex devices such as combination locks that prevent intruders from entering your fort.

These are the basic, modular parts that can be combined to form any complex mechanism. Please note that individual items in the game are not considered components. Also, not all of these components have to be used when making a mechanism.

Mechanisms are useful devices made from the combination of components. Here are some examples:

This is a storage system that allows a user to call a minecart and return them.

For this device, you can stand on a pressure plate and make splash potions shoot out of a dispenser. See the following steps for how to make it:

See the following video for a better demonstration:

This is a customizable vending machine that is relatively easy to make. Unfortunately, it does require a lot of iron.

This is fairly easy to make. Below the floorboard's blocks, you put a face-up sticky piston that is powered when off, done by a redstone torch, and then the next block in the floor has a double-piston extender, also powered when off, and then a triple piston extender, and so on, so when the sticky pistons are powered off, then the blocks will be pulled down into a staircase.

This design features a hidden staircase in the wall, revealed by triggering a redstone signal in some way, such as interacting with a lever or button. There are many ways of making this. Look at the following videos for some examples:

To make this design, make a dispenser attached to a redstone clock mechanism and hopper to feed it items. In front of the dispenser, place a powered rail on a block of redstone and fill a chest above the hopper with minecart with TNT. This will rapidly dispense those TNT minecarts onto a powered rail and into a massive crater of their own. It can even tunnel down to bedrock given enough carts.

With a lot of repeaters and AND-gates it is possible to control multiple outputs with only two wires. It can be very tricky to get the timing right. You need a pulse generator in both wires to get a pulse with a defined length and in most cases, the output pulse needs to be made longer. As shown in this video you have a top wire and a bottom wire with repeater. On one side you have repeater between the buttons on the top wire and none (or as needed) in the bottom wire. On the other side none (or as needed) on the top wire and matching repeater (to the other top side) on the bottom one. between which you place AND-gates (matching the buttons). The idea is that the signals only meet at one AND gate at the same time. Video tutorial:

1x2 flush with the wall piston door. Fitting in a 2x4x4 space.

These "Jeb doors" can also be referred to as flush-inset piston doors. Here is an example of one of these, with a redstone torch key system added on. Once broken down, it's not extremely difficult to build.

For an easy piston door with no sticky pistons:

This design allows one to get a great view on the surroundings and enables you to connect and stop on any floor you want. The video also contains horizontal piston transport.

This design is even more compact than the previous one; however, it blocks sight. It's great for building elevators in shafts. Note: you need to set the pistons to 3 instead of 2. The first is still to be set on 4.

Two-way elevators can be built, but they are slower and much more complex than the previous ones. They also require a lot more space and resources.

The two-way elevator can be built the following way:

The engine shown below of this text uses wool between the pistons and the fence gates/trapdoors. However, instead of wool any other block can be put there, as long as pistons can push it.

A screenshot of an implementation of this design:

Also, see this video for a larger two-way elevator:

This is a quick video tutorial on how to make a compact block swapper.

This is a simple bank system using powered rails, which should be helpful for Minecrafters less experienced with redstone.

This silent BUD switch design updates not only when there is an update going on adjacent to it, but also updates when there is redstone wire placed 1 block away from the BUD switch. 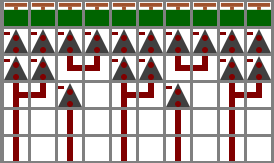 This is the False3D Monitor, if you place a second row of sticky pistons above the first row you can produce 2x2 pixels. To complete the look of the monitor, you need to place blocks in front of the sticky pistons to determine what color the pixels are, example: wool. This happens because when the sticky piston pushes the "pixel block" and then the shading and the 3D cause the pixel to be visible by the player(s). This can generally be used for any purpose regarding visuals, it can also be used for a mob trap if used properly. And there you have it.

A redstone wired sequence of redstone lamps to mimic the lighting of a working floor. It is pretty easy and very good looking.

A compact "flying" machine to make a thin basalt bridge across a lava lake.