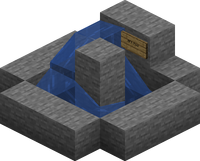 An endless circling pool, also known as an AFK pool, allows the player or any player-sized mob that gets in the water to circle endlessly around the center. These are commonly used for AFK players in multiplayer to avoid getting kicked off the server.

Endless circling pools, or AFK pools, are primarily used on multiplayer servers. Most servers prevent players from being idle for too long by kicking them off the server after 15 minutes or more. For that reason, some players make "AFK Pools" to prevent being kicked off by the system.

Here are some important things to think about when using an endless circling pool.

When you are ready to build an endless circling pool, you need only basic materials:

The following schematics show the construction of an endless circling pool:

To use the endless circling pool, simply jump into the water at any place in the flow. The water should constantly carry the player using the pool all the way around.

A better variation is to build a two-block-wide channel, which can accommodate a boat that you ride in. The advantage is that hunger is not depleted while riding a boat.

With proper water management, one can construct not only circling pools, but also moats around arbitrary areas. Strategic placement of water source blocks along with signs or buttons are used to control the flow of water such that one flow pushes the boat into the next flow, but the next flow pulls the boat out from the previous flow.

Using the techniques described in Tutorials/Water-powered boat transportation, the smallest circling pool that can accommodate a boat has one solid block in the center and four quadrants of water flowing from one corner of each quadrant. This design requires a 7×7 area, 1 layer, 4 water source blocks ("S" in the schematic), and 8 buttons or signs — one on each side of the central block and one on the wall opposite each central sign or button. A tamed cat in the boat with you is useful to repel phantoms if your pool is outdoors and lit sufficiently to keep monsters away.

Larger moats are possible as long as the distance between sources are close enough to prevent the boat from getting stuck. In Java Edition, the taxicab distance between water sources should be 4 blocks or less to avoid submerging the boat.