This page documents how to locate and defeat pyramids.

The treasure room inside the hidden lower chamber of the temple.

The 9 TNT rigged under the stone pressure plate.

To find a desert pyramid, you can either look above ground, or search while mining. If you are underground and you run into a large, square formation of sandstone, it is a desert pyramid.

There is also a tool that can find desert pyramids for you, in case you don't want to search them yourself.

In Java Edition, they have their own separate /locate commands. Note that the following commands are case-sensitive.

When attempting to enter the hidden chamber, the player must take care not to step on the pressure plate at the bottom of the pit, as the plate is connected to 9 blocks of TNT just under the hidden chamber's sandstone floor. The pressure plate is situated directly under the blue terracotta. The TNT will cause an explosion sufficient to kill most players (and may even destroy the player's drops), as well as destroy all four of the chests, including their loot.

To avoid the trap, you can dig out one of the blocks orthogonally or diagonally adjacent to the center block, and reach the chamber by any of conventional methods. Or, if reached from below, it is possible just to mine the way into the chamber.

To see better in the treasure room, it is actually best to destroy the blue terracotta in the upper chamber first. During the day, the light from the sun will shine down into the room, reaching into the treasure room if the terracotta is removed. If you are on a multiplayer server, you can rig up the chests to the TNT to get the better of an experienced player.

There are a number of ways one can get down into the treasure room:

After reaching the bottom, your first act should be to mine the pressure plate in the center to avoid accidentally triggering an explosion. Don't forget to dig out the TNT after raiding the chests.

The dense foliage of jungle biomes tends to block jungle pyramids from sight. The easiest way of clearing the path is to burn the foliage with flint and steel, but you don't want to start a forest fire.

There is also a tool that can find jungle pyramids for you.

The /locate command can also be used and it's explained in the desert pyramid section.

A jungle pyramid is made up of 3 floors. The top 2 floors are just entrances, windows, and walkways - all the treasure, puzzles, and traps are on the bottom floor. There is an entrance already made on the 2nd floor, but sometimes it is buried in the ground.

If the entrance is in plain view, it's usually easiest to enter through the entrance. Otherwise, you can either excavate the entrance, or just bust a hole in the wall and go through that way. If hardly any of the structure is visible, it may be best to go through the roof. It is strongly recommended to enter on the 2nd or 3rd floor and make your way down, so that when you enter the building, arrows shooting at you is not the first thing you must deal with.

Once you've entered, make sure to kill any monsters inside and light up everything with torches. When doing this on the ground floor, be careful not to step on any of the tripwires. 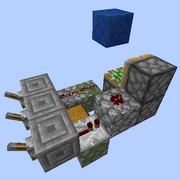 A reconstruction of the puzzle mechanism. The lapis lazuli block represents the hidden trapdoor.

In each jungle pyramid, there is a puzzle, composed of a set of levers on the lower level. When the levers are flipped into the correct positions, a block on the middle level of the building is removed from the floor, and a small room with a chest inside is revealed.

When attempting to open the chest, the player must take care not to step on the two tripwires in the middle of the hall. One tripwire is in the middle hall and the other is in front of the chest. It looks like mossy cobblestone, but hidden behind some vines is a dispenser filled with arrows. The dispenser will fire once when the tripwire is stepped on or broken without shears. If the player can't break it, hugging the right hand wall will cause the arrow to fly harmlessly past the player. Destroy the tripwires and dispensers to prevent the trap from activating. Grab the arrows in the dispenser. You can also destroy the entire mechanism, which is a good source of redstone in the early game. Take the chest.

Tip: A good way to tell where the tripwires are is by running your mouse cursor over the floor, and you will know when it hits a tripwire.

Igloos generate in Snowy Tundra biomes and appear as a roughly spherical mound of snow with ice for windows and an entrance. They may be hard to find because they are made of the same block as the terrain.

The basement of an igloo

Inside, there is a Bed, Crafting Table, Furnace, and a Redstone Torch, necessities for starting players. Take those things and place a torch in the igloo to light it up. In 50% of all igloos, there is a basement under the carpet. Dig out the carpet to find the trapdoor. If there is no trapdoor, you can leave. Inside the basement under the trapdoor, there is a cauldron filled 2/3 with water‌[Java Edition only]/Splash Potion of Weakness‌[Bedrock Edition only], a Brewing Stand with Splash Potions of Weakness, a chest with basic loot and a Golden Apple, two Villagers (one of them is zombified), and a cobweb for string. If you want to start a village, cure the zombie villager with the available supplies and bring the two villagers to the surface using a bubble column or a spiral staircase, and set up a village for them (more about that here). You can also kill the zombie villager and take the golden apple and potion for yourself if you don't want to start a village. The cauldron also has 2 potions of weakness in it, so bring two glass bottles to get the potions. Be sure to mine the brewing stand, cauldron, and flowerpot after raiding, since they will be important later. Remember to use a pickaxe or it will drop nothing.

A Witch Hut in a swamp biome

Witch huts generate in Swamps and are a small house made of spruce wood with no door and a front porch. They are small and can be difficult to find.

Your first step is to kill any witches that have spawned. Then, go inside and place a torch to light it up. Take the cauldron, crafting table, and the flowerpot because they are useful. You can also tame the cat and bring it back to your base.

After raiding a temple, there are many things you can do with it, such as making it into a home, destroying it, mining it for extra resources, or simply leave. Here on some suggestions:

These structures are nice looking and can be used to make a house. The desert temple is large enough to provide a long-term base, but the other 3 have to be expanded to make a large enough base. You can transform the structures to make them suitable for your needs. Include crafting tables, furnaces, enchanting room, brewery, and any other decorative rooms, such as kitchen, living room, or bedroom. For the desert temple and igloo, you can expand the lower chamber to add farms, mines, storage, or whatever you prefer. For the witch hut, you should redesign it into a larger base, and use the original structure bounding box to make a witch farm. If you want this structure to be your main base, and you have expanded it enough, consider adding villagers for a villager trading hall and large scale farms, such as crop farms, tree farms, cobblestone/stone/basalt generators, nether access, etc. Tip: The desert temple's 1st floor, above the treasure chamber, has many 1 wide slots, and those slots can be repurposed for a villager trading hall. You should also take advantage of the natural resources. In deserts, there is sand, dead bush, and cactus. There is jungle wood, bamboo, cocoa beans, pandas in jungles, snow in snowy tundra, and lily pads, blue orchids, slime, and clay in swamps.

Aside from the loot, these structures contain resources that you can get. For the desert temple, you get sandstone related blocks, terracotta, and the tnt in the treasure chamber. In jungle temples, there is cobblestone and mossy cobblestone. In the treasure floor, you can get redstone components, such as pistons, sticky pistons, dispensers, tripwire hooks, string, repeaters, and redstone dust, which can save you some redstone when building redstone contraptions. In the igloo, there is not many useful items, aside from the redstone torches, ice, bed, crafting table, furnace, cauldron, brewing stand, and the villager and zombie villager. The witch hut is almost useless as it only has a bit of wood. The only thing worth taking is the cauldron.