This tutorial seeks to teach you, the player, how to farm blazes, a mob found in fortresses.

There are many uses for a blaze farm. Blazes drop twice as much experience as normal mobs while only having 20 health points, the same amount as a zombie or skeleton. This makes blazes ideal for XP farming. On top of that, blaze rods are the only source of blaze powder which is needed for brewing and to get to the End. Blaze rods are also the fourth most efficient fuel sources; the top three being lava buckets, blocks of coal, and dried kelp blocks.

Before starting your blaze farm, you will need to find a fortress. Once you've found one, you need to decide where and how you want your blaze farm to be built. You can either make a blaze farm from blaze spawners or from the open fortress. Each place needs its own system to deal with them. 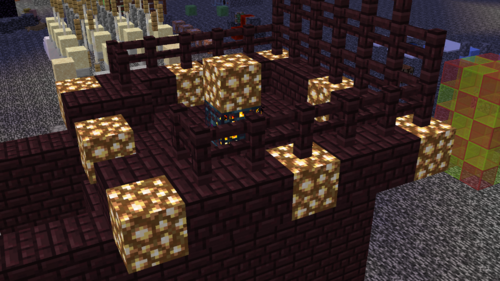 Disabling a blaze spawner with just 9 blocks. Glowstone can be replaced with other light sources of light level 15.

Building a blaze farm around a spawner is possibly the easiest farm to build. This is because the area around a blaze spawner will only spawn blazes. These farms have the following components:

When building a blaze farm using a spawner, it is recommended to light up the area around the spawner temporarily, so that blazes don't spawn while you're building the farm itself. Blazes will spawn around a spawner if there is a light level of 11 or lower (lower half of their body). You can completely stop a blaze spawner from spawning blazes by placing a layer of blocks at the same y coordinates, followed by placing torches on this layer (y coordinate +1).

When you remove the light sources within the cage, you may need a potion of Fire Resistance to survive a swarm of blazes.

These are possibly the most difficult to build because the open fortress will also spawn wither skeletons, normal skeletons, zombified piglin, ghasts, and magma cubes. Building an open-fortress design meant solely for blazes is impractical if you have an alternative, but if your nether fortress does not have a blaze spawner, or you accidentally destroyed them, an open fortress farm is your only option. Here are the basic parts:

There are many different designs for blaze farms. Here are some examples:

In this design, the blazes are pushed by pistons when they touch the pressure plates, which condenses the blazes into the grinder. The grinder, like many other farms, is triggered by a button, which suffocates the blazes until they are down to a half of a heart, allowing for players to kill them in one hit. This design also includes an option to trigger lava flow on and off, allowing to stop blazes from spawning if desired.

This design is very similar to the previous one. Like EthosLab's design, it uses pistons to push the blazes down into a grinder, which suffocates the blazes until they have only a half of a heart left. However, the redstone for this design is different, partially because of the addition of redstone comparators in Minecraft Java Edition 1.5.

This design is different from previous designs. There is no redstone for this design, making it a lot simpler to build. Also, unlike the first 2 designs, the player must move around to kill the blazes, as well as completely kill the blazes, rather than just hit them once. Basically, this design allows the blazes to fall into rows, where the player can safely attack their feet, without taking any damage from the blazes.

This 1.12 design is very resource friendly since it uses the AI wandering process instead of pistons to collect blazes. A follow-up video in the channel further eliminates the redstone-powered grinder by circumventing entity cramming with ladders and killing multiple blazes with a Sweeping Edge sword. (It's still working in 1.14.2).

Here's a very quick tutorial that shows how to build the same farm.

This design was one of the few fully automatic designs for a blaze farm. Because of the fact that it is fully automatic, it requires a lot more redstone than semi-automatic farms, and is therefore more complicated. What happens in this blaze farm is, a player must be in a certain spot, so that the blazes can attack that player. Once the player is attacked, tamed wolves positioned in a certain spot will kill the blaze. Due to the update in 1.8, this design no longer works as blaze do not swim upward in lava.

1.16 adds the feature‌[Java Edition only] that lava pushes fire-resistant mobs. This allows for easy spawner farms similar to using water to push mobs in the overworld. This design by Cheesedud6 uses no redstone for the basic collection unit, with the option of having a redstone mob softener.

Based on Mumbo Jumbo's design (above), this design omits the suffocation block but keeps the player within activation distance of the spawner. The Redstone Repeater needs to be placed facing South with a signal delay of 2. The button on the right toggles the lava lighting to pause spawning, and the lever on the left toggles the centering pistons.