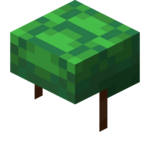 Turtle shells are items that are used for brewing or as a helmet to give the player the Water Breathing status effect.

Like helmets, turtle shells can be placed in the top armor slot of a player's inventory for activation.

If a player is wearing a turtle shell in their helmet slot while out of water, they receive the Water Breathing status effect for 10 seconds. In Bedrock Edition, Water Breathing is given only while in air, not in bubble columns. This effect starts counting down when the player goes underwater, effectively giving the player 10 extra seconds of breath underwater for a total of 25 seconds. Combined with the Respiration enchantment, this time can be increased to 70 seconds.

Equipping a turtle shell also provides the player with 2 (

) defense points, the same amount of defense that golden, chainmail, and iron helmets offer. This means that for damage done to the player while wearing a turtle shell, 8% of the damage is absorbed by the turtle shell.

Turtle shells have 276 durability, more than an iron or chainmail helmet.

Turtle shells can be repaired with scutes using an anvil.

The Turtle Shell is capable of being enchanted with the following enchantments:

Issues relating to "Turtle Shell" are maintained on the bug tracker. Report issues there.