Edit
watch 28:07
Minecraft Interactive Experience
Do you like this video?
Play Sound
This article is about the mob. For the wearable armor-like item, see Turtle Shell.
Turtle 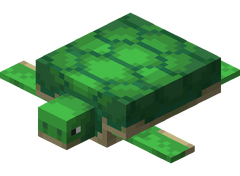 A turtle (in Java Edition), also known as a sea turtle (in Bedrock Edition), is a common passive mob found in beach biomes. They are the only source of scutes, which drop from baby turtles when they mature into adults.

Turtles spawn on the sand in the Overworld on beaches with daylight, but not in its snowy variant or stony shores, occasionally in small groups of up to 5 individuals.

10% of turtles spawned are babies.

In Java Edition, turtles spawn at light levels greater than 8, on sand blocks less than 4 blocks above sea level (typically at Y=62).

When turtles die, they drop:

Baby turtles do not drop anything when they die.

When a baby turtle grows up to an adult it drops:

Turtles can both move around on land and swim in water. They move slowly on land, but they can swim at a fast speed in the water. Like other passive mobs, they move around aimlessly and flee when attacked. When on land, they generally attempt to move to the nearest water source with direct sky access. When in an enclosed area, such as a player-made enclosure, they generally swim in circles if the water is in the area, and rarely go on land to explore, if there is any.

Turtles cannot be attached to leads,[2] but they can be led by a player holding seagrass within 10 blocks of the turtle.

Turtles can be picked up by boats‌[Java Edition only] and minecarts.

Turtles are killed instantly when struck by lightning.

As with other aquatic mobs, turtles suffer extra damage when hit by a trident with the Impaling enchantment,‌[Java Edition only]‌[until JE Edition Combat Tests] and cannot drown, despite the fact that real-life turtles breathe air.

Turtles and turtle eggs are attacked by the following mobs:

Zombies and their variants deliberately trample on turtle eggs, causing them to break.

Turtles remember the block on which they hatch as their home beach. No matter how far away the turtle is, it always attempts to return to its home beach to lay its eggs after breeding.

If the player uses a tool enchanted with Silk Touch to obtain and move turtle eggs to a new location before hatching, the baby turtles remember the new hatching location as their home beach.

If a turtle is spawned from a spawn egg, summoned with the /summon command, or spawned by mob spawners, it remembers the spawn location as its home beach.

Feeding two turtles seagrass causes them to enter love mode, causing one of the turtles to have eggs in its inventory and appear a bit bigger (about 0.2 of a block) than normal turtles. The pregnant turtle then travels back to its home beach, which is where it first spawned. Upon arrival, it seeks a nearby sand block on which to lay its eggs. A turtle always lays eggs within 9 blocks from where it was born. The turtle digs vigorously while turning 360 degrees for several seconds a few times, and then lays 1–4 turtle eggs. In Java Edition, the pregnant turtle re-enters love mode for 30 seconds after laying the eggs while the other turtle is available to be fed again immediately after mating. In Bedrock Edition turtles have a 90-second cooldown between breeding.

Turtle eggs can be placed on any block in clusters of up to 4, however, they hatch only on sand or red sand, above or below water. Eggs can be broken without tools and can also be trampled by living entities falling or walking on them. When a multi-egg block is trampled, eggs are broken one at a time. A turtle can walk on the eggs without breaking them. Harvesting eggs with Silk Touch drops an egg, which the player can collect. Mining an egg with Silk Touch resets the egg's growth.

Turtle eggs progress toward hatching by cracking. Cracking occurs during random ticks, and an egg hatches once it has cracked 3 times. When a multi-egg block hatches, all eggs within the block hatch simultaneously. Eggs grow fastest during the night and typically take 4 to 5 in-game days to hatch. See Turtle egg#Hatching for more details.

With a height of 0.12 blocks, baby turtles are among the smallest mobs in the game. Baby turtles are small enough that when they walk on soul sand, they are entirely within the space at the top of the block and therefore suffocate in it, much like endermites and silverfish.

Upon hatching, baby turtles search for the nearest water block within a 47×1×47 region two blocks below the turtle and attempt to approach it.

Baby turtles take one Minecraft day to grow up (20 minutes). The growth can be accelerated using seagrass. Each use reduces the remaining growth duration by 10%. Upon becoming an adult, the turtle drops a scute.

Turtles have entity data associated with them that contains various properties.

Issues relating to "Turtle" are maintained on the bug tracker. Report issues there.