Edit
watch 28:07
Minecraft Interactive Experience
Do you like this video?
Play Sound
Tuff 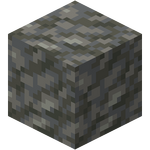 Tuff is an ornamental rock formed from volcanic ash, occurring in underground blobs below Y=16.

Tuff can generate in the Overworld in the form of blobs. Tuff attempts to generate 2 times per chunk in blobs of size 0-862, from elevations -63 to 16, in all biomes. Additionally, tuff can generate in an ore vein that consists of iron ore below Y=0.

Tuff can replace stone, diorite, andesite, granite, and deepslate. Any ore that generates in tuff becomes its deepslate variety. Tuff also generates occasionally in the deepslate layer below Y=0.

Tuff drops as an item if mined by any pickaxe. If mined without a pickaxe, it drops nothing.

Tuff is currently used only for decoration. It cannot be crafted into anything else.

Issues relating to "Tuff" are maintained on the bug tracker. Report issues there.