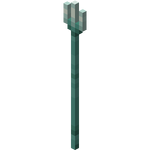 A trident is a weapon used in both melee and ranged combat and is a rare drop from drowned.

Tridents are not craftable. A trident can be obtained only when dropped by a drowned.

15% of drowned in Bedrock Edition (6.25% in Java Edition) spawn with a trident of random durability as their natural weapon, and only the drowned with a trident have a 8.5% chance of dropping the trident, increasing by 1% with each level of Looting.

Only naturally-spawned drowned can spawn with a trident and have a chance of dropping one. In Java Edition, a trident held by a drowned has a chance to be enchanted, but the trident's enchantments have no effects for drowned.[1]

15% of drowned in Bedrock Edition, and 6.25% in Java Edition, spawn with a trident as its natural weapon. It throws the trident at its opponent every 1.5 seconds, dealing 9

damage in normal difficulty. A drowned can throw unlimited tridents, and these tridents cannot be picked up by the player.

A villager can be turned into a zombie villager if it is killed by a trident thrown by a drowned: the chance of conversion is 0% on Easy difficulty, 50% on Normal, and 100% on Hard and Hardcore.

In Bedrock Edition, a drowned can use the trident's melee attack if its target is within three blocks. The melee attack deals 9

Pressing attack while holding a trident deals damage to both mobs and players. Tridents deal 9

melee damage. A successful hit consumes durability of the trident. 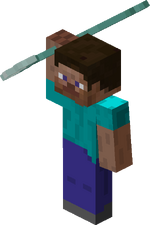 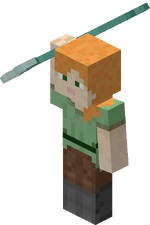 Pressing and holding use while holding a trident charges it. When released at full charge, the trident is thrown and deals damage to any entity it hits. It flies on a ballistic trajectory similar to that of an arrow, but at 80% strength. If the trident hits a block, it sticks to the block. If it hits an entity, it bounces off the entity and lands nearby. It is also blocked by shields and can be retrieved once it lands in the ground. Thrown tridents can trigger wooden buttons, wooden pressure plates, and target blocks. A trident can be thrown at a chorus flower or pointed dripstone to break it, which causes the block to be dropped as its respective item.

In Bedrock Edition and Java Edition Combat Test 4, tridents can be shot by dispensers regardless of enchantment.

Thrown tridents take 1 durability damage, regardless of whether it hit an entity or not. Tridents with 1 durability remaining cannot be thrown.

Tridents enchanted with Riptide launch the player a certain distance when thrown, with the distance increasing for higher enchantment levels. They can be thrown only if the player is standing in water, or if it is raining on the block they are standing on. If the player charges it but walks into a nearby dry area, the charge is canceled. If the player throws a Riptide trident and collides with a mob, the mob takes melee damage (including critical damage if the player is falling). In Java Edition tridents enchanted with Riptide take one durability damage upon throwing, and lose an additional 1 durability if it collides with an entity on both editions.

Tridents enchanted with Channeling summon a lightning bolt if there is a thunderstorm, although only upon hitting a mob or player standing in the rain as well as a lightning rod placed in the rain.

Unlike other projectiles, the trident does not slow down when thrown through water or lava.

In Java Edition, the Impaling enchantment affects all water mobs. In Bedrock Edition, it deals extra damage to players and mobs in water or rain.

Unlike arrows, thrown tridents do not despawn.‌[Bedrock Edition only] Tridents despawn after 60 seconds if they are not picked up.‌[Java Edition only][3]

Using Riptide, nearby players or mobs deal splash damage within an 8.25×8.25×4.25 cubical area. It stacks with the Impaling enchantment and Strength effect. Critical hits do not increase splash damage, but affect the target.

In Bedrock Edition, thrown tridents can damage the ender dragon while resting on the bedrock fountain. In Java Edition, they act just like arrows — deflected, but burn as if they had Flame.

damage. The damage remains the same regardless of the trident's speed. It has a faster charging speed than a bow or crossbow (barring the Quick Charge enchantment.)

In Java Edition, tridents have an attack speed of 1.1 and take ~0.91 seconds to recover.

In Bedrock Edition, tridents have no attack cooldown and do the following damage:

A trident with the Riptide enchantment can be used to propel a player with a pair of elytra, but only in rainy weather, during snowy weather in certain biomes[4] or while the player is in a body of water. This does not consume any durability.

Tridents have a base enchantability of 1 and can receive the following enchantments:

Tridents have the same durability as an iron sword. Whenever a trident deals damage, its durability decreases by 1.

Tridents can be repaired by:

Tridents have entity data associated with them that contain various properties of the entity.

Issues relating to "Trident" are maintained on the bug tracker. Report issues there.