From Minecraft Wiki
Jump to: navigation, search
For the mechanic used with piglins, see Bartering. 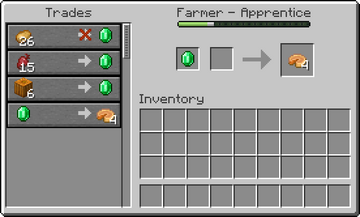 The trading system is a gameplay mechanic that allows players to trade emeralds for items (and vice-versa) with villagers as well as wandering traders.

Villagers have five career levels that can be increased by trading with them. Each villager starts at the "novice" level. A villager's level can be seen in the trading menu. The badge they wear can also be identified: stone for a novice, iron for an apprentice, gold for a journeyman, emerald for expert, and diamond for master. When a player trades with a villager, both the villager and the player gain experience. All villager trades reward the player with 3–6 experience, or 8–11 experience if the villager is willing to breed. A wandering trader trades also reward some player experience. A villager levels up when its experience bar becomes full and gains up to two new trades, along with keeping their old ones. Additionally, a villager receives regeneration and becomes surrounded by purple and green particles for a few seconds.

A villager's profession dictates the trading pool used to determine its trades. For example, villagers wearing straw hats are farmers, so their trades are based on the Farmer trade pool. Each profession unlocks a pre-defined and finite set of offers. Different professions are assigned to each villager based on their job-site block. This profession is indicated by their appearance and in the trading interface. Novice villagers who have not traded can lose their profession and change back into unemployed villagers if their claimed job site block is removed. Removing and then replacing a job site block can alter the trades offered, and a villager with no experience resets its trades every so often. Once a player trades with a villager, the villager keeps its profession forever and subsequently locks in the offered trades.

Villagers disable an offer after a certain number of trades, the exact number is different for each item and referenced in the tables below. When villagers work at their job site blocks, they activate their offers again, up to twice per day. When an offer is disabled, a red "X" appears in the trading interface, and the villager displays the same particle effect as an offer being created. 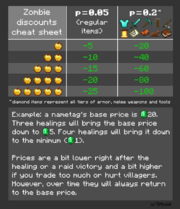 In Java Edition, villagers can have a maximum of 10 trades. Each level unlocks a maximum of two new trades. If a level can pull from more than two trades, the two offered trades are chosen randomly from the set.

In Bedrock Edition, villagers have 8–10 trade slots. Some slots with multiple possible trades display only one trade; for example, farmer villagers have 4 potential trades in their first trade slot, so each trade has a 1⁄4 chance to be chosen.

Each trade can be used a maximum number of times, after which the trade becomes disabled. Once trades are disabled, villagers must work at their corresponding job site block to resupply their trades.

The price of an item rises and falls depending on three factors. Items with a high price multiplier (0.2) are affected by these changes more than items with a low multiplier (0.05). All price fluctuations affect only the first item involved in trade; for example, for an initial trade of 32 sticks for 1 emerald, the price might be driven down to 1 stick or up to 64 sticks for 1 emerald, but never for 2 emeralds. Additionally, no quantity can go lower than 1 or higher than the stack size.

The first factor is demand. An item that was sold out gets a price increase for all players when resupplied. If a player does not trade for a higher-priced item, the price is reduced the next time villager resupplies. Demand is tracked per item, not per villager, so a villager can offer a higher-priced trade for a single item while other items are cheaper. Trades that have a price multiplier of 0 are not affected by demand.

The second way to affect prices is the Hero of the Village effect, which temporarily reduces prices for the affected player depending on the level of the effect.

Finally, players get personal discounts or fines based on their reputation with that particular villager. A positive reputation is gained by curing zombie villagers (the villager that was cured gives a permanent discount much larger than the temporary discount in nearby villagers). To cure a zombie villager, a player must splash it with a splash potion of weakness and then feed it a golden apple. The permanent discount is capped at 5 cures, while the temporary discount is capped at 8 cures. In Java Edition, players can also gain negative reputation by hitting or killing villagers, and positive reputation by trading.

Nitwits are green-coated villagers. They cannot trade, nor can they change profession. If the player attempts to trade with a nitwit in Java Edition, the nitwit grunts and shakes its head.‌[Java Edition only]

Mason.
Note: This profession is called "Mason" in Java Edition and "Stone Mason" in Bedrock Edition.

Unlike other villagers, the wandering trader does not buy items in exchange for emeralds – it only sells items, using emeralds as a currency. Therefore, the following tables' leftmost column is how many emeralds the player needs to give to receive the items listed in the middle column of the table.

Five of the random trades are shown in the table below:

The other random trade is shown below (these items are chosen for each wandering trader and always offered but only one of them):

The wandering trader offers five random trades from the list below.

The other random trade is chosen from the table below. It is always the wandering trader's final trade offer.

Issues relating to "Trading", "Trades", or "Trade" are maintained on the bug tracker. Report issues there.