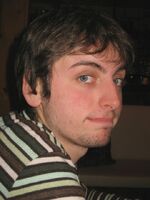 Tommaso Checchi (/ˈkɛkˌki/ KEHk-kee) is a member of the Minecraft Redmond team. Initially, Tommaso wanted to be an artist, but decided to learn programming since he "couldn't wait for people to program for him". Setting his sights on making games, he started with multimedia fusion game makers and later learned C++.[4]

Before working on Minecraft, Tommaso was a programmer on Cobalt's game engine. Jeb acknowledges him as being good at working on C++ and graphics/rendering.[5]

He currently works for the team of development for Minecraft Bedrock Edition.[6] He also stated that while Johan is working on the "hard stuff", such as Realms, he would work on the "missing & easy things",[3] such as splash text to the main menu in Pocket Edition.[7] He also works on the game's graphics, such as adding improvements to the sky, glowing spider eyes, updated chest model,[8] zombies and skeletons lighting on fire under sunlight,[9] shadows and mipmaps.[10][11] In February of 2017, he transferred from the Mojang office and moved to Seattle to continue work on Bedrock Edition in the Minecraft Redmond office.[12][13]