A gametick is where Minecraft's game loop runs once. The game normally runs at a fixed rate of 20 ticks per second, so one tick happens every 0.05 seconds, making an in-game day lasts exactly 24000 ticks, or 20 minutes. However, if the computer is unable to keep up with this speed, there are fewer game ticks per second (TPS). As the vast majority of actions are timed based on tick count rather than on wall clock time, this means that many things take longer on a slower computer.

A statistic related to ticks per second (TPS) is milliseconds per tick (MSPT), the time a server actually uses to compute a tick. The TPS can be maintained at 20 only if the MSPT is no higher than 50. The following often contribute to server-side lag:

The MSPT value is displayed in the F3 debug screen as "ms ticks" in Java Edition. The frame time graph (Alt + F3) shows the TPS value. Both displays are available only as a multiplayer host or singleplayer since the stats come from the integrated server of your minecraft game.

In Java Edition, in each game loop the following actions are processed in order: 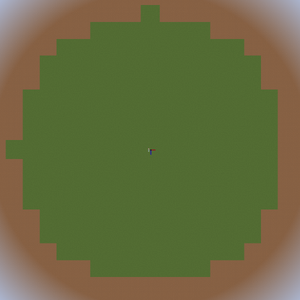 The extent of random tick, shown with the spread of grass on dirt. Notice how the grass follows chunk boundaries. The red and blue arrows in the center mark the +X and +Z directions. The player is in the (7,7) location in a chunk, slightly towards the north-west corner of the chunk, which means the centers of two chunks on the edge in the -X and -Z directions are brought within the 128-block radius, thereby allowing chunk tick processing. This is confirmed by the two one-chunk grass protrusions on the northern and western edges. (North is up)

As a part of a game tick, specific chunks are ticked on every game tick.

In Java Edition, chunks with loading type of entity ticking (see Chunk#Level and load type) and with horizontal distance between its center and a player (not in spectator mode) less than 128 blocks are ticked on every game tick. A few things should be noted here: first, the chunk should be loaded as an entity-ticking chunk. Second, if the chunk receives chunk tick, even if some blocks in the chunk are out of the 128-block radius, they can receive random tick as normal. Third, because 128 blocks is the horizontal distance, the player's position along the y-axis does not matter.

In Bedrock Edition, all loading chunks are ticked on every game tick.

The following things will happen when a chunk gets ticked:

Chunks consist of one subchunk per 16 blocks of height, each one being a 16×16×16=4096 block cube. Sections are distributed vertically starting at at the lowest y level. Every chunk tick, some blocks are chosen at random from each section in the chunk. The blocks at those positions are given a "random tick".

Most blocks ignore this tick, but some use it to do something:

Some blocks can request a tick sometime in the future. These "scheduled ticks" are used for things that have to happen in a predictable pattern—for instance, redstone repeaters schedule a tick to change state in Java Edition, water schedules a tick when it needs to move.

As a part of a game tick, each block position that has requested a scheduled block tick gets ticked on the specific game tick.

A redstone tick describes two game ticks. This creates a 1⁄10 of a second delay in the signal of a redstone circuit; that is, the signal's time to travel from a location A to location B is increased by 0.1 seconds. A tick pertains only to the increase in signal time, thus, a signal's travel time can never be decreased in reference to ticks. A redstone repeater has a delay of 1-4 redstone ticks. The default delay is 1 redstone tick, and pressing use item on the repeater increases it, visually indicated by the slider moving down the block.

In Java Edition, redstone ticks are actually not a "real" thing, but a term created by the community to make redstone easier since most redstone components have delays of multiples of 2 game ticks.