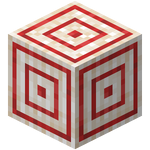 A target is a block that provides a temporary redstone charge when hit by a projectile. It also has utility in redstone circuitry for redirecting redstone dust, making it a useful redstone component.

A target can be found in ancient cities.

Targets can be mined using any tool or by hand, but a hoe is the fastest way to break it.

The strength of the signal depends on how close the projectile is to the center of the block, from 1 to 15.

The target also provides a block update when hit, meaning that an observer can detect if the target has been hit and has produced a redstone signal.‌[Java Edition only][2]

When used as part of a redstone circuit, a target has the unique property that, though being an opaque block that is not a mechanism component, still can redirect adjacent redstone dust to point to itself.

Issues relating to "Target" are maintained on the bug tracker. Report issues there.