Back to page
Add topic
Archives

I just got a chicken in the Nether, all on its own, no baby/pygmy zombie pigman on it. Is this supposed to happen? Vanilla 1.12.2. 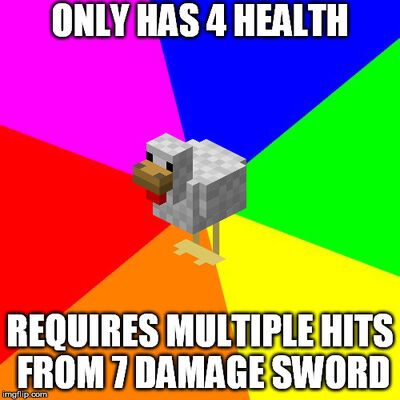 I made a meme about this problem earlier. Why does this happen? I'd strangle a chicken in-game and interrogate it about this evil magic if I could. But, that can't happen. That's why I'm typing this here.--Anothersrpelofan (talk) 17:01, 7 July 2018 (UTC)

Shouldn't there be a section in the history on the Java edition foxes where they kill chickens, Bedrock history is up to date. –Preceding unsigned comment was added by Goldenghost1000‎ (talk • contribs) at 14:24, 5 September 2019‎ (UTC). Please sign your posts with ~~~~

Chickens dissapear right after i breed them[]

they have enough space, i made sure theres no walls next to them, and they clearly dont look like any suffocation is happening but for some reason i can only have like 8 chickens in my 5 by 5 coop at a time or something bc every time i breed them some of the adults just dissapear. Also i have an egg farm but they make eggs very slowwwly probably due to the fact all my adult chickens keep dying. –Preceding unsigned comment was added by 73.155.108.166 (talk) at 16:52, 16 January 2020‎ (UTC). Please sign your posts with ~~~~