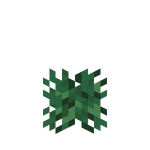 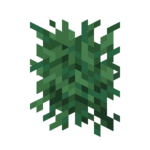 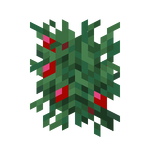 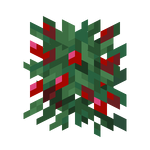 Sweet berries are a food item that are collected from sweet berry bushes.

A sweet berry bush grows through four stages after it is planted. Its first growth stage is a small bush without any berries. It becomes a grown plant in its second stage, and produces berries in its third and fourth growth stage. The bush needs to be in light level 9 or greater to grow. Using bone meal on it increases its growth stage by one, and at full maturity, ejects the sweet berry item. The bush can be placed on a 1 block high space, but it cannot grow with a full, non-transparent block immediately above it.

To eat sweet berries, press and hold use while it is selected in the hotbar. Eating one restores 2 (

Placing sweet berries into a composter has a 30% chance of raising the compost level by 1.

Sweet berries can be fed to foxes to breed them. Foxes are similar to cats when being fed as a wild animal; a sudden movement by the player may cause the fox to flee even if the player holds sweet berries. A baby fox bred by a player trusts the player and does not flee.

Sweet berry bushes past stage 1 slow down entities (except items) and damage mobs (though foxes are not affected either way). They deal 1

damage every 0.5 seconds to the player or other mobs. Entities that move through sweet berry bushes slow down to about 34.05% of their normal speed (similar to a cobweb, which slows down mobs to 15% of normal speed). This makes it impossible to jump a full block while inside the bush.

Mobs at standard block height in a minecart are not damaged when the minecart is pushed through sweet berries. Players in a sweet berry bush take no damage except from horizontal movement, but are unable to jump out of the bush, similar to a cobweb.

Bees pollinate sweet berry bushes, and then increase the honey level in beehives and bee nests by 1.‌[Java Edition only]

The following content is transcluded from Technical blocks/Sweet Berry Bush.