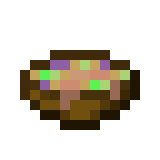 Suspicious stew is a food item that can give the player a status effect that depends on the flower used to craft it.

Suspicious stew is the only food item in the game that cannot be obtained from the Creative inventory; however, it can be crafted and found in shipwreck chests. Suspicious stew can be given with commands like /give, but in Java Edition, unless NBT data like that listed in the data values section is included, consuming it has no effect and still restores the same hunger points as a normal suspicious stew. In Bedrock Edition, giving the player a suspicious stew through commands causes the stew to choose an allowable status effect at random.

After being given a flower, a brown mooshroom can be "milked" for suspicious stew by using a bowl on it. The flower type determines the stew's effect using the same rule as a crafted stew. Milking a red mooshroom after feeding it a flower does not yield a suspicious stew specific to that flower.

In Java Edition, expert-level farmer villagers can offer either 1 or 2 suspicious stew trades, each stew for one emerald.

The trading interface does not indicate the type of suspicious stew being sold, but each trade entry consistently yields the same type of stew, so the player can remember or make a note of the types offered by a given villager, such as "this villager's first stew gives blindness, and their second entry gives saturation".

To eat suspicious stew, press and hold use while it is selected in the hotbar. Eating one restores 6 (

The bowl is emptied and returned to the player after the suspicious stew has been eaten, and can be re-used to craft more stews. Unlike most foods, suspicious stew can be eaten even if the player's hunger bar is full.

The Saturation effect effectively makes those two stews a superfood: In those 6 or 7 ticks it can restore up to 6(7) hunger and 12(14) saturation points on top of their food value, for a total of at least 12 (

× 6) hunger, and effectively maximizing saturation. This is the largest amount of hunger and saturation the player can get from a single food item. Regeneration can restore up to 3

health, and Poison or Wither can inflict up to 4

Consuming suspicious stew is the only way to obtain the Saturation and Blindness effects in vanilla Minecraft without the use of commands.

Issues relating to "Suspicious Stew" are maintained on the bug tracker. Report issues there.