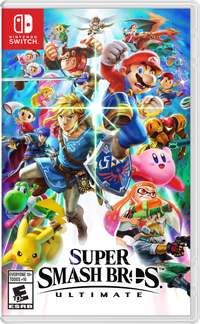 Super Smash Bros. Ultimate (Japanese: 大乱闘スマッシュブラザーズ SPECIAL) is a crossover action fighting game published by Nintendo. It was released on December 7, 2018 on the Nintendo Switch family of systems.

Steve and Alex were announced as a new playable character in Super Smash Bros. Ultimate on October 1st, 2020 as part of Challenger Pack 7. The zombie and the enderman were also revealed as alternate costumes for the fighter. The DLC pack was released on October 13th, 2020 for US$5.99.

Minecraft World is a stage in Super Smash Bros. Ultimate. True to the source material, it can take the appearance of various biomes, affecting the stage layout. The stage also has a day-night cycle. The background of this stage is seemingly based on Java Edition, due to terrain differences such as the abundance of tall grass in the Plains stage and snow layers not occupying the same block as plants in the Snowy Tundra stage.

Each biome can be forced to load by entering inputs in the stage select screen. The biomes are, as follows:

amiibo figures of Steve and Alex were announced on October 5, 2021, and are planned to release in spring 2022 (Northern Hemisphere).