This item has been officially made unobtainable.
It can still be obtained using third-party software. However, this can cause unexpected behavior such as bugs and crashes.

This feature is exclusive to Bedrock Edition and New Nintendo 3DS Edition.
Stonecutter 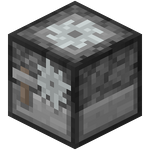 The stonecutter is a decorative block that has no other functions.

Stonecutters are available in the creative inventory‌[New Nintendo 3DS Edition only], by pick blocking an existing stonecutter in the world, or third-party software.

An old stonecutter requires a pickaxe to be mined, in which case it drops itself. If mined without a pickaxe, then the mining is slower and it drops nothing.

Stonecutters can be used only for decoration.

Issues relating to "Stonecutter" are maintained on the bug tracker. Report issues there.