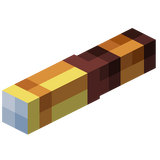 A spyglass is an item that can be used for zooming in on specific locations.

To use a spyglass, the player selects it from the hotbar and clicks use while looking in the desired direction.

The player is slowed down while watching through the spyglass. When the player uses the spyglass continuously for 1 minute (1200 game ticks), the interface is automatically closed.

Issues relating to "Spyglass" are maintained on the bug tracker. Report issues there.