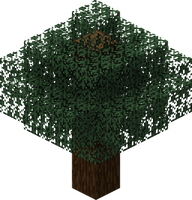 A spruce tree,[1][2] also known as a pine tree,[3][more information needed] grows from a spruce sapling and has growth patterns and requirements similar to birch trees, although they appear different. They are mainly found in the taiga biome, but they may also generate in wooded mountains, snowy tundra, snowy taiga, and giant tree taiga biomes. Spruce logs have the same texture as oak logs, but it is a darker shade of brown; its leaves are denser, with a darker and blueish tone.

There are several different forms of these trees that may grow from any spruce saplings:

The spruce tree variants spawn naturally in the indicated biomes:

In an amplified taiga or giant tree taiga, some of the spruce trees generate with snow on them, just like in the other cold biomes.

When mega spruce trees grow, they convert any grass blocks, dirt, mycelium, coarse dirt and rooted dirt up to a radius of 6 blocks to podzol, centered on the south-eastern sapling.

Like birch trees, they do not grow branches. When height-constrained, the trunk height maximum is two less than the roof. The headroom of 9 blocks limits the tree to a trunk height of 7, which enables harvesting from ground level.

Spruce saplings may be planted and grown on:

In order to grow a 2×2 tree (be it spruce, jungle or dark oak), four saplings must be placed adjacent to each other in a square. For growth to succeed, there must be no blocks adjacent (even diagonally) to the north-western side up to the final height of the tree. Bone meal can be used on any of the saplings. The largest jungle and spruce trees reach 31 blocks tall.

1×1 spruce trees require a 5×5 column of unobstructed space at least 7 blocks above the sapling to grow (8 blocks including the sapling itself). No horizontal clearance is needed at the base of the tree and 1 level above (a sapling planted in a hole 2 blocks deep can still grow).

2×2 spruce trees require a 5×5 column of unobstructed space at least 14 blocks above the saplings to grow (15 blocks including the saplings themselves). This column is centered on the northwestern sapling. A 3×3 area is required at the base of the tree (the level of the saplings).

In Bedrock Edition, giant spruce trees do not grow if the northwest sapling is on farmland.

In Bedrock and Education editions, trees can generate as one of the two following variants of the normal tree. Both of these generate naturally, and can be grown out of normal saplings.[4][5]

A dying spruce has the standard growth pattern of any other tree, however, all exposed logs in the main trunk are covered with vines.

A fallen spruce may consist of a single upright log, or a stump. Logs lying on their side are often found 1–2 blocks from the stump. They occasionally have mushrooms on top.

A fallen spruce log has a length of 6–10 blocks, and the stump is never covered with vines.

This section is missing information about MC-177626, maybe with info as to why it happened, and example renders.
Please expand the section to include this information. Further details may exist on the talk page.

Issues relating to "Spruce" are maintained on the bug tracker. Report issues there.