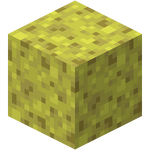 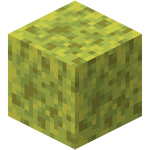 A sponge is a block that can be used to remove water around itself when placed, turning into a wet sponge in the process.

Either type of sponge can be mined by hand, or with any tool, dropping itself as an item; however, hoes break sponges the fastest compared to other tools.

An elder guardian always drops one wet sponge when killed by the player.

A wet sponge can be dried in a furnace, making the sponge reusable.

A wet sponge placed in the Nether dries out instantly with a puff of steam and turns into a normal sponge.

A wet sponge placed in any dry biome in the Overworld dries out after a few minutes and turns into a normal sponge.‌[Bedrock Edition only]

If a normal sponge comes into contact with water in a dry biome, it absorbs the water and immediately dries out with a puff of steam.‌[Bedrock Edition only]

A sponge absorbing water in a pond.

A sponge can be used to turn water into air by "absorbing" the water. A sponge instantly absorbs nearby water when it is placed next to water or when water comes into contact with it. Sponges immediately turn wet upon absorption and do not absorb any more water afterwards. Wet sponges emit small water particles on their surface, similar to crying obsidian or how some blocks drip when water or lava is above them. Sponges in item form do not absorb water or become wet.

A sponge absorbs both flowing and source blocks of water up to 7 blocks away (taken as a Manhattan distance) in all six directions around itself. Instead of a cube or a sphere, this effectively encloses the volume of an octahedron with vertices placed 7 units away from the center in each direction. A sponge does not absorb more than 65 blocks of water however, and water closest to the sponge is absorbed first. The absorption propagates only between adjacent water blocks and does not "jump over" non-water blocks, including air.

In Bedrock Edition, sponges use the following data values:

In Bedrock Edition, sponges use the following block states:

Issues relating to "Sponge" or "Wet Sponge" are maintained on the bug tracker. Report issues there.