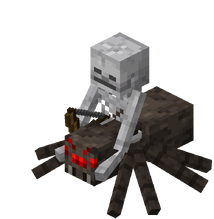 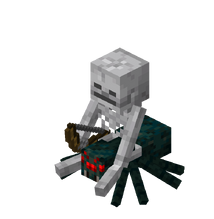 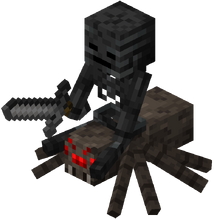 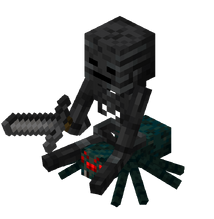 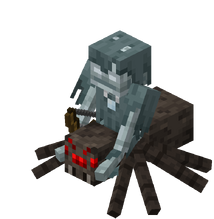 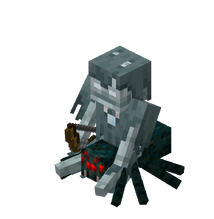 Spider jockeys are the rare appearance of a spider or cave spider‌[BE only] being ridden by a skeleton, stray, or wither skeleton.‌[BE only]

On hard difficulty, spiders have a chance (depending on regional difficulty) of spawning with a single beneficial status effect. This effect can be speed (40%), strength (20%), regeneration (20%) or invisibility (20%), and has an essentially infinite duration.‌[JE only]

Baby zombie variants can mount spiders and cave spiders. Specifically, baby zombie variants have a 15% chance to want to be a jockey, and if they do, then upon nearing the player and before attacking, they check for one of the following and mount it: adult zombies, chickens, sheep, cows, pigs, llamas, ocelots, foxes, pandas, mooshrooms, untamed cats, untamed wolves, horses and variants, spiders and cave spiders

The skeleton and the spider each have separate drops when that part of the spider jockey is killed.

Their drops are no different than if the skeleton or spider were standing alone.

The spider controls the movement, so a spider jockey wanders aimlessly in the day and pursues the player at night or in dimly lit areas when the spider is hunting. The two creatures attack and take damage individually (i.e. if the spider is killed, the skeleton continues to attack and move, and vice-versa). The skeleton dismounts if the spider pounces into water.

When a spider jockey rides a minecart, the minecart automatically accelerates, along with the spider's legs moving as if it was walking.

A spider jockey spawns as two separate entities. The spider and skeleton's IDs nor the entity data are any different than if the skeleton or spider were standing alone.

Issues relating to "Spider Jockey" are maintained on the bug tracker. Report issues there.