Spectator mode is one of several Game modes, which allows the player to fly around and observe the world without interacting with it in any possible way. Spectator mode can be enabled by using the command /gamemode spectator, /gamemode sp, /gamemode 3, or after player's death in Hardcore mode on a multiplayer game or server. In the Java edition of Minecraft, as of update 1.12, it is also accessible by holding F3 (default) and N. This is only possible in Creative mode and with cheats enabled. However, this is not yet available on Bedrock Edition, but it is only available on Java and Legacy Console Editions.

In spectator mode, players are invisible, can fly, go through blocks and entities alike, and view all entities, including other players.

Spectators can see other spectators and invisible mobs, as well as themselves by pressing F5 (default). Spectators appear as a translucent, disembodied head, and the selected item from the hotbar is also visible. Invisible mobs appear translucent, like when viewing an invisible ally with /scoreboard teams option <team> seeFriendlyInvisibles set to "true".

Spectators can use the "Highlight Players (Spectator)" control if changed from the default (nothing). This will allow the spectator to see other players as if they have the "Glowing" status effect and if let go, the effect will disappear. Like with the status effect, the color of the outline is affected by a player's scoreboard team.

Spectators can freely move through any block, entity, or player. When their head is inside a block, they can see through all blocks. They cannot take damage, as all attacks will pass right through them. Ill effects such as being set on fire, drowning, or suffocation also do not affect them. However, it is still possible for them to take damage from the Void or the /kill  chat command.

Spectators are always flying. They cannot stop flying by landing, as a player will just go through the blocks. The mouse scroll wheel (in the PC version) and the Sprint key affect the flying speed, but slowness and swiftness status effects do not. The maximum speed that can be achieved is 43.556 m/s or 87.111 m/s while sprinting.

If a player opens their inventory while in spectator mode, they cannot interact with, or use any of the items in it. Likewise, viewing GUIs is possible, but it is not possible to interact with them. If a container uses a loot table to generate its contents, but the loot has not yet been generated, a player in the spectator mode cannot open the container to view its contents. Items in the world also cannot be picked up.

A spectator can left-click on an entity, to view the world through its eyes. Their position is locked to that of the entity, and their POV moves in accordance with the entity. Viewing oneself while spectating from an entity's point-of-view using F5 (default) shows the entity. Pressing the dismount key (⇧ Shift by default) returns a player to flying mode.

Certain mobs also apply a shader while looking from their point-of-view. This filters how the world is portrayed to the spectator. Similar to the Super Secret Settings, if one presses F4 (default), it removes the filter without dismounting the mob. Below is a table of mobs that have a filter:

In spectator mode while playing on a server, pressing a number on the keyboard will teleport to a specific player on that server by pressing 1, or to a team member by pressing 2. 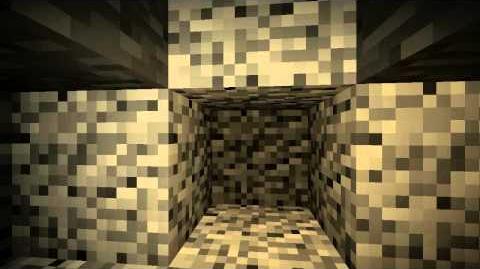 Minecraft Game Modes- Spectator
Add a photo to this gallery
Retrieved from "https://minecraft.fandom.com/wiki/Spectator_Mode?oldid=214387"
Community content is available under CC-BY-SA unless otherwise noted.