Edit
This article is about the block. For mob farms, see Tutorials/Mob farm. For the entity in Minecraft Dungeons, see MCD:Mob Spawner.
Spawner 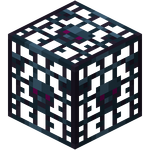 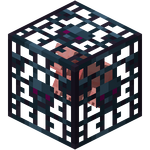 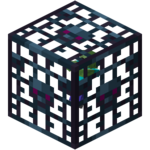 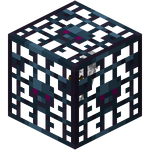 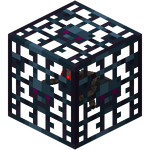 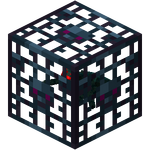 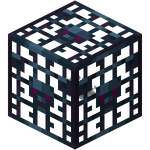 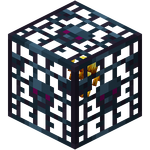 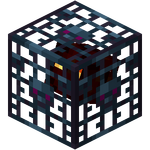 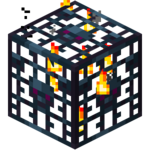 A spawner (in Java Edition) or monster spawner (in Bedrock Edition), is a cage-like block that can spawn mobs. When configured, it contains a miniature, spinning version of the type of mob it spawns.

Spawners cannot be obtained in Survival, even with Silk Touch.

In Bedrock Edition, a monster spawner can be obtained in Creative mode by taking it from creative inventory, by using the /give command, or by using pick block. It is initially empty and inert, but can be configured to spawn a desired mob by using a spawn egg on the placed block.

In Java Edition, spawners are not found in the creative inventory[1] and are the only block with an item form that cannot be obtained by pick block. The only way to obtain one is by using the /give command, which gives a pig spawner by default; afterward the mob can be changed by using a spawn egg on the placed block.

A /setblock, /clone or /fill command can also be used to obtain a spawner.

If broken with a pickaxe, a spawner drops 15-43 experience. When mined with anything else, it drops nothing.

Spawners can generate naturally in the following places:

Dungeons
One in the center of the dungeon spawning one of the following mobs with the indicated frequency: zombie (50%), skeleton (25%), or spider (25%).
Mineshafts
Any number of cave spider spawners, densely surrounded by cobwebs, scattered throughout.
Woodland mansions
Optionally one spider spawner, densely surrounded by cobwebs, in a rarely generated secret room on the 2nd or 3rd floor. It is sometimes visible through the windows from outside.
Strongholds
One silverfish spawner in the end portal room.
Nether fortresses
One or two blaze spawners on fenced platforms with full-block "stairs" leading up to them. Normally two are generated per fortress, but there can be fewer.
Bastion remnants
Any number of magma cube spawners hanging from chains underneath a bridge in treasure rooms.

The spawner spawns mobs in a 9×3×9 volume (see § Mechanics) around it when the player is within 16 blocks. Suitable spawning locations for the block's mob type are provided in or around the spawning volume. The spawner attempts to spawn four mobs around it, then waits from 10 to 39.95 seconds before spawning more.

In Peaceful difficulty, spawners still activate but do not spawn monsters in Bedrock Edition. In Java Edition, zombified piglins, magma cubes, and ghasts do not spawn at all and other hostile mobs disappear immediately after spawning.

Spawners are transparent, but they behave like leaves in that they diffuse sky light coming from directly above.

In Bedrock Edition, they have a hitbox slightly smaller than a full block, and therefore, one can walk on the edge of a supporting full block directly below the spawner.

A spawner activates when a player comes within a spherical radius of 16 blocks from the center point of the block; i.e. 15.5 blocks from the spawner itself. In Java Edition an active spawner attempts to spawn mobs within a 4-block horizontal and 1-block vertical range; that is, in a 9×3×9 volume centered on the spawner. In Bedrock Edition, the horizontal spawning range is 4 blocks taxicab distance, creating spawning volume extending 4 blocks in each cardinal horizontal direction from the sides of the spawner; its horizontal cross-section is therefore diamond-shaped. Mobs can spawn anywhere in this range that is suitable, with mobs more likely to spawn closer to the spawner than farther away.

While mobs are spawned at fractional x and z-coordinates (i.e. not aligned to blocks), they are spawned at an integer y-coordinate. Horizontally, a mob can spawn with its center point anywhere within range, but vertically, mobs spawn with their legs at either the same layer as the spawner block, one block above it, or one block below it.

The spawner attempts to spawn 4 mobs at randomly chosen points within the spawning volume, then wait anywhere from 200 to 799 ticks (10 to 39.95 seconds) before spawning again. As it waits, the mob inside the block spins faster and faster. Except for spawning on a solid block, all of the usual requirements for spawning must be met (not in a solid block, correct light level, etc.), so the spawner often produces fewer than 4 mobs. When it does spawn, it emits a "poof", and more flame particles temporarily appear around it. If the spawner fails to spawn any mobs because it did not pick any suitable locations, it repeats this process every tick until it succeeds. It starts waiting for the next cycle after it spawns at least one mob. If, at the time of spawning, 6 or more mobs of the spawner's type are present within a 9×9×9 volume centered on the spawner block (in Java Edition) or a 16×10×16 volume centered on the lower northwest corner of the spawner block (in Bedrock Edition), the spawner "poofs" without creating any mobs and then waits for the next cycle.

The spawner performs a relaxed version of the ordinary spawning check: the general solid block requirement is removed, but the volume (hitbox of the mob), the light level, and other checks are kept. As a result, for some types of mobs to spawn in the outer planes of the spawning volume, some planes outside the volume may also need to be free of opaque blocks to conform with the mobs' height, width, or other rules governing their individual spawn volumes. For example, for mobs that are two or more blocks tall such as zombies, skeletons, or blazes to spawn in the top y-layer, the layer above that must contain only air.

For all of the volumes listed in the table, the horizontal plane is centered on the center of the spawner block. While the spawning volume for pigs is 8.9×2.9×8.9, the requirement of grass blocks that are necessary for pigs to spawn reduces the actual volume in which they successfully spawn to 8.9×1.0×8.9. Other mobs can spawn in mid-air, ignoring general rules about spawning on solid ground.

The spawn conditions do not include biomes for most mobs. As such, spawners can place mobs where they normally wouldn't generate. For example, a mooshroom spawner can operate in a plains biome as long as there are mycelium blocks within the spawn area because the mooshroom's spawning code checks only for mycelium. The reason mooshrooms are not actually spawned elsewhere is that the game does not normally try to spawn them in other biomes: only the mushroom field biome has mooshroom on the list of things to spawn.

The way a spawner can be disabled depends on the entity it tries to spawn.

For a spawner that generates mobs that spawn only in dark conditions (light level = 0), a torch placed on any side or top of the spawner is sufficient to disable it for the whole 9×9×3 volume.

For a blaze or silverfish spawner, a light level of 12 is required to prevent spawning. This can be achieved by:

A spawner is also disabled by filling the spawning volume with solid blocks. This is often used to disable magma cube spawners, as magma cubes can spawn in any light level. However, since all magma cubes require the space of a large magma cube in order to spawn, a clever placement of as little as 9 solid blocks a layer above the spawner (see right image) can completely disable it.

Using commands, spawners can be customized:

Detailed technical information about custom spawners can be found below.

Spawner can be placed under note blocks to produce "bass drum" sounds.

A spawner has a block entity associated with it that holds additional data about the block.

Issues relating to "Spawner" are maintained on the bug tracker. Report issues there.