From Minecraft Wiki
Jump to: navigation, search
This article is about the mechanic in Java Edition that keeps certain chunks loaded all the time. For the similar game mechanic in Bedrock Edition, see Ticking area.

Spawn chunks are chunks found at the world spawn point which are not unloaded from the memory, unlike normal chunks.

Normally, old chunks beyond player's chunk loading distance get unloaded from the memory and new chunks get loaded into the memory. Because of this, events such as redstone mechanisms and farms in unloaded chunks stop processing. Since spawn chunks remain loaded, events occurring in them continue to process, even if no players are nearby. If the world spawn is set to a laggy area using commands, such as an area with many redstone clocks, lag is present wherever the player is in the world. 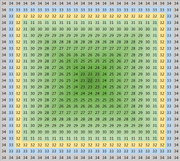 The so-called "spawn chunks" behavior arises from a start ticket which is created for the world spawn chunk. This ticket has a level of 22 which "propagates," or flows, to neighbouring chunks. Each time the level flows, it increases its level by 1 until the maximum of 34 is reached. This behavior is illustrated by the picture to the right.

Different levels of propagation have different behaviors. These levels are divided into 4 load types.

There are some limitations which may affect the behavior of spawn chunks.

Each dimension has its own "idle timeout." Without a player or forceloaded chunks in the overworld, this timeout eventually expires. When the timeout expires, some behaviors such as entity processing stop for spawn chunks and the rest of the dimension. The timeout can be reset by frequently sending entities through a portal.

Only chunks with horizontal distance between its center and a player less than 128 blocks are ticked on every game tick. This stops events caused by random ticking, such as crop growth.

A new world spawn point can be set using /setworldspawn. If no coordinates are provided, the block position that the player is currently standing on becomes the spawn point. The chunk where the world spawn is located is then given a start ticket with a level of 22 and the ticket for the old spawn chunks is cleared.

This section of the article is empty.
You can help by adding to it.
This section is missing information about When was the concept of spawn chunks introduced?.
Please expand the section to include this information. Further details may exist on the talk page.
Retrieved from "https://minecraft.fandom.com/wiki/Spawn_chunk?oldid=1923948"
Categories:
Hidden categories: