For other types of torches, see Torch (Disambiguation).

Soul torches are turquoise variants of regular torches crafted from Soul Soil or Soul Sand, Charcoal or Coal, and Sticks. They were added in Java Edition 1.16 snapshot 20w06a.Piglins are afraid of it.

Soul Torches can be used to craft Soul Lanterns with one soul torch and 8 iron nuggets.

Soul torches work mostly the same as regular torches. They act as a light source for the player to utilize. The most noticeable difference being the blue light cast. Soul torches also emit a lower light level than normal torches (12). Unlike normal torches, soul torches will not melt snow and ice. However, soul torches act like piglin repellant by keeping them at least 7 blocks away. This applies to everything that uses soul light. 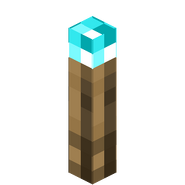 The soul torch model that was on the beta for Bedrock Edition.
Add a photo to this gallery
Retrieved from "https://minecraft.fandom.com/wiki/Soul_Torch?oldid=223621"
Community content is available under CC-BY-SA unless otherwise noted.