Edit
Not to be confused with Soul Soil.
Soul Sand 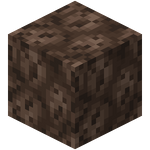 Soul sand is a block found naturally only in the Nether and ancient cities. Soul sand usually slows down the movement of mobs and players walking on it. It is also used for growing nether wart, for crafting items that emit soul fire, and for constructing a wither.

Soul sand is found below Y=34 in the nether wastes, generally in four-block-deep layers. It is also found naturally in nether wart rooms of nether fortresses.

Soul sand can generate in the Nether in the form of blobs. Soul sand attempts to generate 12 times per chunk in blobs of size 0-23, from altitudes 0 to 31, in soul sand valleys. It can replace only netherrack.

Soul sand is also found in ancient cities, making it the only location to find soul sand in the overworld.

Soul sand can be mined with any tool (or none), but shovels are the quickest.

Piglins may barter 2–8 soul sand when given a gold ingot‌.

Soul sand slows the movement of any mob or player that is not wearing boots enchanted with soul speed by 50% and causes them to sink 2 pixels into the block while walking on it.

A hopper underneath a soul sand block can collect items that are dropped on it.

Soul sand cannot be used in place of regular sand as a falling block because it is not affected by gravity.

Snow or carpet placed on soul sand shields the player from its effects.

Striders are slowed down by soul sand underneath a layer of lava.

Four blocks of soul sand (or soul soil) are used in the construction of the wither. The four blocks are arranged in a "T"-like formation (similar to the summoning of an iron golem) and 3 wither skeleton skulls are placed in a row on top of the "T" to summon the wither.

Placing soul sand under source water blocks creates a lifting bubble column, which causes items, entities, players, and mobs inside the column to rise to the surface. The bubble column extends upward through any number of empty water source blocks (not waterlogged blocks).

A player can restore breath by entering a soul sand's bubble column.

Soul sand can be placed under note blocks to produce cowbell sounds.

Issues relating to "Soul Sand" are maintained on the bug tracker. Report issues there.