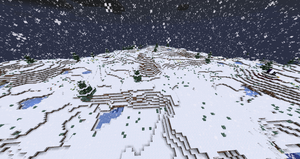 A view of hills during a snowstorm.

Snowfall is a type of weather that occurs occasionally in Minecraft.

Snowfall is a temporary, biome specific occurrence that can happen randomly at any time in snowy biomes. In stone shore biomes, mountains, and variants, snowfall can only occur at layer 90 and above. In taigas, giant tree taigas and variants (except giant spruce taigas), snowfall can occur only at layer 120 and above. Snowfall occurs at layer 150 and above in giant spruce taigas (160 in Java Edition). In hot/dry biomes and in other dimensions it does not snow at all.

The average snowfall lasts 0.5–1 Minecraft day, and there is a 0.5–7.5 day delay between snowstorms. Snowstorms have a small chance to worsen into thunderstorms.

Thunderstorms can be skipped entirely with the use of a bed.

Snow falling in a snowy biome.

Snowstorms darken the world, causing the light from the sun to decrease by 3, bringing it to light level 12 in full daylight. Moonlight, however, is not reduced, and remains at light level 4. The sky itself darkens, even in biomes where it does not snow, and in Java Edition, celestial bodies (the sun, moon, and stars) are no longer visible.[1] In Bedrock Edition, the sun and moon are still visible in biomes with no snow. The clouds darken from white to a light gray, although clouds themselves do not precipitate. Although the sun is not visible during snowfall, the glow associated with sunrise and sunset is still visible.

As it snows, snow layers regenerate over all non-transparent blocks.[2] In Bedrock Edition, these snow layers accumulate and grow over time.

Falling snowflake particle effects are visible through the air over all cold regions during snowfall. Unlike with rain, any entities that are on fire are not extinguished on contact with snow. Snowflakes fall in the two middle lines of a block; they do not visibly fall directly onto the player.

This section describes a feature planned for Bedrock Edition.
It has not appeared in any development versions yet, but is planned to be included in Bedrock Edition 1.17.0.

During snowfall, cauldrons under the sky slowly fill with powder snow.

Issues relating to "Snowfall" are maintained on the bug tracker. Report issues there.