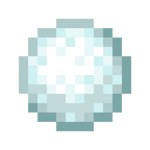 Creeper and TNT explosions leave snowballs in the resulting debris field if near snow.

Snowballs can be thrown by using them, similar to an egg. They are affected by gravity.

to blazes but they deal no damage to other mobs. Mobs still have knockback and give the same effect as if they were being damaged (for example, zombified piglins who are hit by snowballs become aggressive toward the attacker), but players are unaffected.[1]‌[until JE Combat Tests]

When fighting the ender dragon, end crystals are able to be destroyed by snowballs being thrown at them.

Snowballs can be fired from dispensers.

Snowballs have entity data that define various properties of the entity.

Issues relating to "Snowball" are maintained on the bug tracker. Report issues there.