Edit
This article is about the regular snow golem. For the Minecraft Earth variant, see Melon golem.
Snow Golem 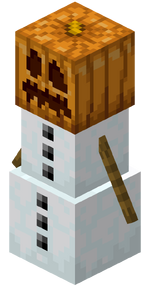 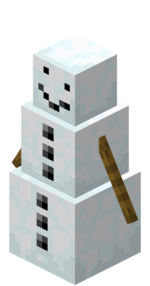 A snow golem is a snowman-like utility mob that helps defend against hostile and neutral mobs.

Creating a snow golem requires the player to stack two snow blocks, then place a pumpkin‌[Bedrock Edition only], a carved pumpkin, or a jack o'lantern on top. A dispenser may also be used to place the pumpkin. The building pattern also works when arranged sideways or upside-down, as long as the pumpkin is the last block placed. In Java Edition, the player can also place the pattern in any order with an uncarved pumpkin, then use shears on the pumpkin to create a snow golem.

The snow golem spawns at the location of the pumpkin when created horizontally.

Endermen are capable of creating snow golems by placing the necessary blocks, although this is an extremely rare event because they do not do so deliberately.[1]

Snow golems do not follow players. Snow golems have good path-finding skills; like most mobs, snow golems avoid cacti, fire, lava, and water. They avoid falling off cliffs, although they are immune to fall damage. Snow golems can be put on leads and tied to fences.

Snow golems "melt" (take fire damage) in biomes with a temperature greater than 1.0, or dry/warm biomes like badlands, deserts, savannas and biomes in the Nether. The Fire Resistance effect allows them to survive in these biomes.‌[Java Edition only][2]

They also melt (take damage) when in contact with rain or water, or any water source block.

Snow golems do not take freezing damage from powder snow.

Snow golems move toward every monsters (except ghast) and throw snowballs at them up to 10 blocks away, provoking them, regardless of whether they attack the player.[3] Thrown snowballs do not deal damage except to blazes and wolves,[4] but the snowballs still knock back mobs that they hit.

Snow golems also attack creepers, provoking them and causing them to explode.

The golem's snowballs can deal damage more than a knockback if the shot flies through a lava block.‌[Bedrock Edition only]

As they move, they leave a trail of snow on the ground if the blocks can support it.[5] If a snow golem is on a hopper or if the mobGriefing game rule is false, a snow trail does not appear. They produce snow only in biomes having a temperature less than 0.81, which includes cold, snowy, and temperate biomes (including the End but not jungle).

Snow golems have entity data associated with them that contain various properties.

This section is missing information about 1.14 changed pumpkins multiple times.
Please expand the section to include this information. Further details may exist on the talk page.

Issues relating to "Snow Golem" are maintained on the bug tracker. Report issues there.