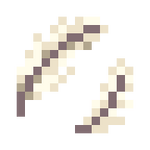 Slow Falling is a status effect that causes the affected mob to fall slower and take no fall damage, but does not prevent ender pearl damage.

The affected entity falls at a much slower rate than normal, and is immune to fall damage. However, the entity still takes damage from using an ender pearl. In addition, the entity cannot turn farmland into dirt by jumping on it.

Boss mobs are the only mobs that cannot have this status effect. However, shulkers can have the status effect but are unaffected by it.

Issues relating to "Slow Falling" are maintained on the bug tracker. Report issues there.