Slabs are highly blast-resistant blocks that measure half a block in height. They can be crafted, but they can also generate naturally in a variety of Generated Structures.

Slabs come in a variety of different types, based on the material of which they are made. There are 29 different materials which come in slab form:

Two slabs can be stacked to make a block of regular height. When two slabs of the same material are stacked on top of one another, some varieties appear as if they were a full-sized block, but other varieties appear unmistakably as individual slabs.

Slabs have a unique quality when it comes to the Spawning of Mobs. A slab placed as the bottom half of a block will not allow any mobs to spawn on top of it, whereas a slab placed as the top half of a block will follow normal mob-spawning rules. This quality is useful when trying to make areas where no mobs can spawn, as a player can cover the entire surface of a room with slabs that are a half a block high, and no mobs will spawn in that room, regardless of whether the room is lit.

Redstone placed on top of slabs, like when placed on Glowstone, cannot power a redstone wire diagonally downwards, but can be powered by that redstone wire. It also does not obstruct redstone currents in the way that solid blocks do.

Slabs can be crafted in stacks of six, by combining three identical "full-sized" blocks (one of the 10 different types of material). Make a horizontal line of the desired materials in a Crafting Table. 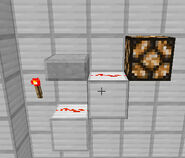 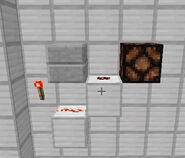 The wings of an airplane with double slabs.
Add a photo to this gallery
Retrieved from "https://minecraft.fandom.com/wiki/Slab?oldid=203981"
Community content is available under CC-BY-SA unless otherwise noted.