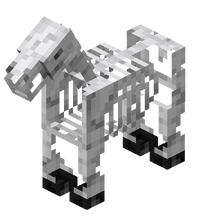 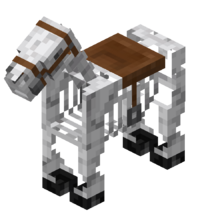 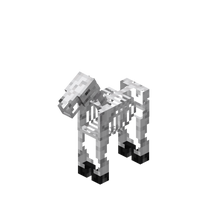 A skeleton horse is an undead variant of the horse. It sometimes spawns when lightning strikes.

The skeleton trap horse is triggered when a player comes within 10 blocks of it, resulting in a lightning strike that does not start fires or damage nearby entities. When struck, the skeleton trap horse transforms into a skeleton horseman: a skeleton, a stray or a wither skeleton riding a skeleton horse. It also spawns three additional skeleton horsemen in the vicinity. Each skeleton is equipped with an enchanted iron helmet and an enchanted bow, and has damage immunity for 3 seconds after spawning (in Bedrock Edition. Both horse and rider are immune to lightning).

Upon death, a skeleton horse drops:

If saddled, it drops a saddle.‌[Java Edition only]

Killing a baby skeleton horse yields no items or experience.

Skeleton horses can be used as one of the fastest means of transportation in the game, though they are unable to fit through single block-wide openings. They can also be used to climb hills and jump fences because the skeleton horses can jump up to five block heights, versus the player's maximum of one (without a potion).

Skeleton horses can be pulled using a lead.

A skeleton horse does not have an inventory and cannot be equipped with a saddle or armor. Despite this, the default texture file, like those of normal horses, donkeys and mules, includes a chest.

The player can control a tamed (and saddled in Java Edition) skeleton horse with standard directional controls, jump, and the mouse. The player dismounts using the dismount control.

A player can use any item while riding a horse, including drinking or throwing potions; activating doors or redstone devices; using chests, crafting tables, and furnaces; breaking and placing blocks; and attacking with melee weapons or bows.

A ridden horse automatically runs up any one block high slope. The horse and rider can safely fit through a space as low as 2.75 blocks high. Lower clearance risks suffocating the rider if the rider's head enters a non-transparent block. The horse itself can enter gaps as low as 1.625 blocks high, but may itself take suffocation damage when clearance is less than 1.75 blocks. Horses cannot fit through a 1-block-wide gap.

While being ridden by skeleton horseman, the skeleton horse and rider move fast and maneuver like skeletons, strafing when attacking and backing up when the player moves toward them.‌[Java Edition only]

They can also be tamed by the player.

Unlike other passive mobs, skeleton horses slowly regenerate health evident by their health bar while the player rides it. This is the same case for normal horses. However, they cannot be bred or fed.

All horses have three "equine stats" that vary from horse to horse: health, maximum movement speed, and jump strength. These stats are created once the horse is born or spawned, and are not affected by food.

When spawned in any way except breeding – for instance, using commands, spawning naturally, spawning as part of a skeleton trap, or using spawn eggs – horses are assigned their stats within certain ranges, specific according to their horse type.

Skeleton horse's speed is always 0.2; the player's normal walking speed is 0.1. The speed listed does not include any status effect that affects the speed of a horse or a player.

The following derived equation can be used to approximate a horse jump height, with x being its jump strength attribute. This function was fit to the data found in the table below.

The jump strengths required to clear several block heights are:

Skeleton horse sounds are the sounds of the regular horse but lower pitched and slowed with reverb.

The following sounds section uses an outdated format and should be redone using {{Sound table}}.
You can help by converting the contents of this section into a sound table template.
Examples can be seen at Bee#Sounds and Ladder#Sounds.
The wikicode should be laid out neatly as in these examples for improved readability.
Remember to include a foot parameter so the table appears in the correct place. Do NOT convert the table using Visual Editor.

Skeleton horses have entity data associated with them that contain various properties.

Issues relating to "Skeleton horse" are maintained on the bug tracker. Report issues there.